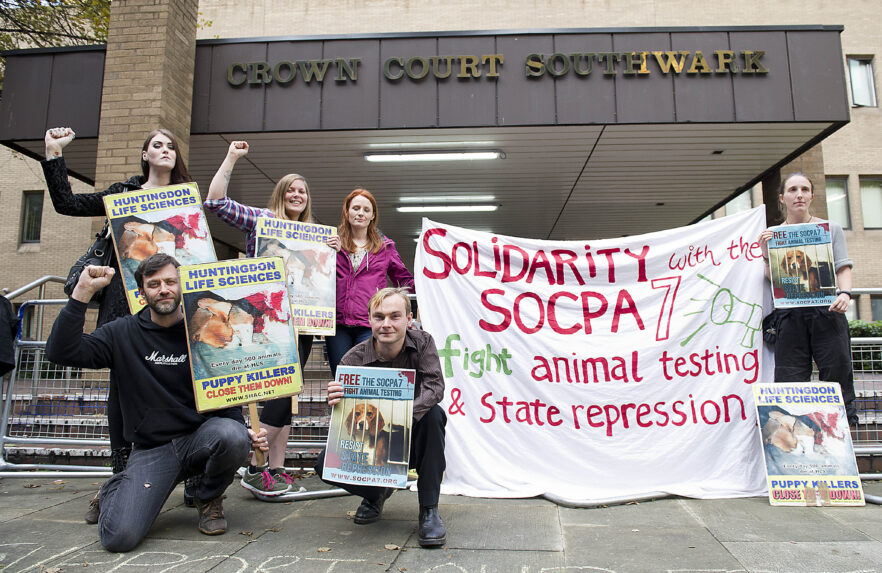 After more than 2 years on bail the SOCPA7 were sentenced at Southwark Crown Court in London on Friday, for their part in protesting against animal testing at HLS.

A peaceful protest was held outside the court and many compassionate activists filled the public gallery in a show of support for the defendants and in resistance to State repression.

Despite all of the protests in this case being non-violent and fairly uneventful, the defendants were disproportionately sentenced because of their connection to the SHAC campaign.

Thankfully they have all avoided serving prison sentences for this case for now, but they were given a range of suspended prison sentences and large cost orders and fines. Debbie was given a 12 month prison sentence to run concurrent (at the same time) as the sentence she is currently serving for her other case, the Blackmail 3.

For a full explanation of what happened during the sentencing hearing, the punishment each defendant was given and a look at what this case means, please visit our website: www.socpa7.org/sentencing.html

There is no justice in the legal system. The State will go to any length to silence effective activism, particularly against animal testing. The battle surrounding vivisection will continue and so it is incredibly important that we work together to build an understanding of and resilience to repression and support our comrades in the fight for justice.

Although the struggle can be hard at times, we must support our casualties. Solidarity will give us the strength to win the war for liberation!

Photo: The defendants outside court after the hearing – Alexis, Steve, Lorna, Emily, Anton and Emma.