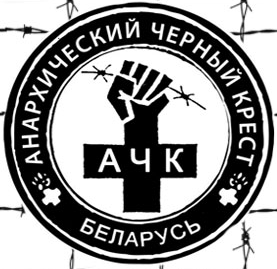 It has been a long time since the last call for solidarity with the Belarusian anarchists appeared. Today we have to admit that the new wave of solidarity is needed urgently to help them out from the prison. That’s why we call you to participate in days of action in solidarity with Belarusian political prisoners from June 30 to July 2.

The activists Ihar Alinevich, Mikalai Dziadok, Artsiom Prakapenka, Pavel Syramolatau, Aliaksandr Frantskievich, Jauhen Vas’kovich that were detained in autumn 2010 and winter 2011 and then sentenced to 3 to 8 years of prison in May 2011 for a series of attacks on state and capital symbols are finishing their second year in jail. During this time their comrades and relatives did their best to help them feel comfortable in custody and set them free. In October 2011 they were acknowledged political prisoners by right-watch organizations. This fact gave them bigger chances to be freed as soon as possible, because at the moment the President of Belarus, Alexander Lukashenko, faces pressure from the European Union with the demands to set free all the political prisoners and decriminalize them. From August 2011 he has already pardoned more than 30 of them, but none of our comrades was granted freedom. Lukashenko said publicly, that he will pardon only those, who will write the petition for pardon, thus admitting their guilt and asking him personally for mercy. All the rest will remain in prison, he stated. In fact two comrades, Mikalai Dziadok and Alexandr Frantskevich were already asked if they want to sign the petition in August 2011, both refuses to do it. Now there are 13 political prisoners left in Belarus, among them are 5 our comrades and 1 more, imprisoned for the action of solidarity with them. We are sure that none of them will ask for mercy, because it would a shame for an anarchist or any honest person to do so. All the prisoners are experiencing different kinds of pressure from the administration of the prisons they are held in*, because Lukashenko wants to be a winner in this situation and make it as if it is not the EU that forces him to set free the political prisoners in fear of more political and economic sanctions, but as if it is his good will to pardon them, again only if they ask for it. We strongly oppose the fact that our comrades are now traded for benefits form the EU and condemn the pressure that they experience*. We call everybody to protest against this tortures and demand the immediate liberation of the political prisoners of Belarus, including anarchists.

To know more about the attacks, visit http://abc-belarus.org/?p=6&lang=en

To know more about the sentences, visit http://abc-belarus.org/?p=326&lang=en

Friends and Relatives of the arrested