On 31st Oct/1st Nov 2009, at the Cowley Club, 12 London Road, Brighton, UK.
2 Days of discussions & presentations about the struggle for liberation, inside and outside of the prison walls. Organised by random anarchists and the Anarchist Black Cross, and in attendance comrades from across Europe. Topics/Themes include: 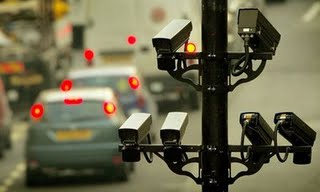 DONT smile for the camera!

The State of Things to Come – Presentation by Tony Bunyan of StateWatch about new european security architecture, biometrics & surveillance technologies and the open prison society.

Prison Struggle across Europe – A wave of repression and resistance as Europe hots up during the economic meltdown. Presentations on some of the different situations.

Campaign Against Prison Slavery – Fighting the corporations involved in the prison industry and making the links between attacks on workers and outsourcing labour to prisoners.

Fortress Europe – Borders are the prison walls of the nation-state. We want to destroy all immigration detention centres forever.

Combating the open prison – Our modern consumer capitalist societies are becoming increasingly like open prisons, watched and spied on, monitored and databased, the average UK citizen is in a prison of monstrous proportions. We need a social and libertarian revolution for a world where we control the direction of our own lives.

Mental Health – One out of four people can be described as ‘mentally ill’ from new guildlines and governmental reports, the repression of everyday life is making us sick, and the only solution is to overthrow the conditions that make us ill.

As the economic crisis hits deeper and people get organised and angry, the state needs media diversions like the War on Terror, escalating political repression, paramilitary policing, new prisons & immigration detention centres, biometrics, surveillance, relentless imperialist incursions – All to maintain the class divisions that ensure continued economic exploitation. The UK State, leading others, is about to proceed on a major prison building project, whilst more and more our societies already resemble open prisons. It all has to go.

This is a call for debate and exchange, to reflect and agitate…for a world without need for prisons or borders.