So two weeks after the wave of disturbances swept across England, and the state’s blinkered response is clear to one and all – revenge against all those that stepped outside the accepted norms of of our disfunctional society. Unless of course you are a politician, media tycoon, corporation, or cop, in which case the normal rules dont apply and you are free to get away with just about anything – like stealing £’s thousands and millions, and of course shooting people dead.

What we are seeing is naked class justice from the ruling class directed at the working class, as they break all the rules they expect us to abide by and make up new ones to suit themselves along the way. Or to look at it another way, on the 10th August they were scared, very scared, and they didn’t like it one bit. So thousands arrested, over 1600 so far railroaded through emergency courts, hundreds of images of people published by the media before any sort of trial, unusually long prison sentences and irregular bail conditions handed down, and so on. With the prisons & police cells full to bursting with both remanded and sentenced prisoners, it only needs one spark for the whole prison system to break down, whilst the conditions inside the prisons will cause many prisoners to break down. The suicide of a remand prisoner at Bristol prison last weekend will not be the last (remember that whatever charges the person may face, they aint even been to trial yet). Meanwhile back on the streets its business as usual for the ruling class with rising unemployment and inflation, more cuts to services, devalued wages and pensions and savings, and of course more bank bailouts from public money.

Here in Bristol some 51 people have been arrested and about 22 charged so far, whilst everyone’s favourite local Tory rag the E/Post has seen fit to publish multiple images of people alongside one-sided reporting. Fair trials in the UK? Not on Cameron’s watch. Bristol’s activist squatting scene has also come under attack, with attempted and threatened evictions, and even a raid. Cops raided en mass a squat in the city centre, with journalists in tow, allegedly looking for a named individual and all sorts of items associated with so-called ‘domestic terrorism’ – bikes, white paint, mobile phones, readily available literature and the like. Apparently they also said they were after literature related to 3 local ‘extremist groups’ – Rising Tide, No Borders, and, er, ABC. So that’s 3 long-standing local groups who hold regular public events, freely hand out info, and openly offer their opinions on their own websites. A really smart police officer could of course download ABC’s literature from this very website, without even asking, but that would hardly fit with their current gung-ho media-backed profile. Welcome to the clampdown, it’s nothing new. Bristol Defendant Solidarity meanwhile were one of the few groups to publicly express support for those facing charges, with this statement.

Bristol ABC didnt manage to publish a prisoners list in August, to be honest its hard to keep up, but we should have one out in September. Meanwhile here’s some updates on some of the cases we’ve been following:

Jock Palfreeman’s final appeal in Bulgaria against his 20 year sentence was unsurprisingly dismissed, so he continues to need support. Media article.

The six UK anti-fascists imprisoned in July have been joined inside by 2 more of their fellow defendants, whilst a third was fortunate to get a suspended sentence. They are being moved around prisons – latest details here from Leeds ABC, along with info on their support fund. One of the 2, Tomas Blak, issued this defiant individual statement.

Defendants facing trials from the students protests of late 2010, and the March 26 anti-cuts demo, are continuing to come to court, and some are being sent down. Groups such as LDMG and GBC continue to offer legal support, and we need more ABC groups to offer prisoner support – so welcome back to the new London ABC. Its great to see Leeds ABC upping the ante, whilst the old stalwarts of Brighton ABC continue to plug away. Rumours too of a newish ABC group in Notts, and indications of interest elsewhere. With our class and our comrades under attack, we need to make sure we look after one another.

Further afield in Europe there is a similar picture, as the economic crisis leads to more economic attacks on ordinary people, followed by resistance, and accompanied by more arrests and clampdowns. As ever Greece leads the field on many fronts, cresting a wave of discontent that is spreading from southern Europe northwards, whilst across the world from north Africa to latin America a very stormy autumn is building. Our links on the front page will lead you to more news and info on comrades imprisoned. 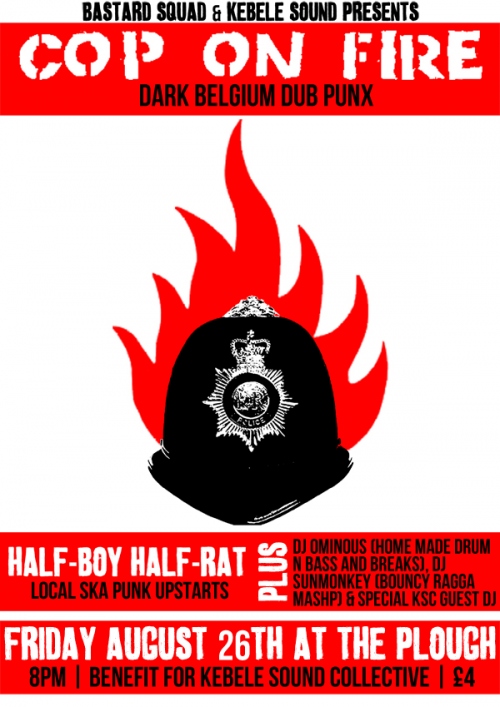 Prisoner support, like most acts of solidarity and dissent, requires the freely given time and energy of many many people. It also needs funds, and those willing to organise raising those funds. So to end here’s a shout out for Kebele Sound Collective, benefit organisers and PA providers of many a Bristol event. Their kit needs replenishing, so they can carry on doing the business – so come to a fundraiser for them on 26 August – see poster image – or give them a hand with future events. Now is the time for solidarity and mutual aid, in all its forms.