On May 10, 2016, two anarchists Bayram Mammadov and Giyas Ibrahimov were arrested by police in Baku for tagging a monument dedicated to the glory of former president, and father of the current one, Heydar Aliyev. The graffiti said “Fuck the system” and “Happy slave day”. These were painted on the evening before Aliyev’s birthday, which is a holiday in support of the state in Azerbaijan. Just tagging the statue would have earned a year in prison, but that was not enough for the police who also charged them with carrying a kilo of heroin each. Bayram was arrested around 2.30 pm as he was photographing the graffiti, and was taken to the police station where he was beaten and threatened to be raped with a stick until he signed a confession, including for drugs. He was then offered a deal: apologise by laying flowers in front of the Aliyev monument and in front of the television. The next day, he was brought in front of a judge and asked to give names of other people who were involved. The humiliations and beatings continued for several days, sometimes filmed by the police.

On the 25th of October Giyas Ibrahimov was sentenced to 10 years in prison. Bayrams trial is still outstanding, but it is to be expected that his sentence will be between eight and twelve years imprisonment. Both anarchists suffer heavy repression and torture in the prison. 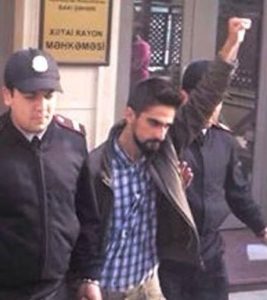 Get more information, and listen to Giyas’s sentencing statement, here.