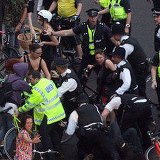 Monday 25th February is the first day of the CM9′s court case. The trial will last between 5-7 days. There will likely be a large contingent of cyclists at the court on the morning of the 25th demonstrating our support for the defendants.

Join us on bikes and with placards from 9am at:

On Friday 27 July 2012, the opening ceremony of the Olympic Games coincided with the monthly Critical Mass ride. 182 cyclists were arrested. They were held in three seperate police kettles for… more here justicecm9.wordpress.com