As the legal case around the 6 Bristol EDO Decommissioners grows ever more complicated, there’s timely news of another benefit for their support campaign this Friday, 4 September, from 8.30pm at The Plough – see image! These benefits help pay for publicity and research in defence of the six, along with some travel costs and of course prisoner support – Elija (James) Smith is still on remand remember, nearly 8 months in jail without a trial. 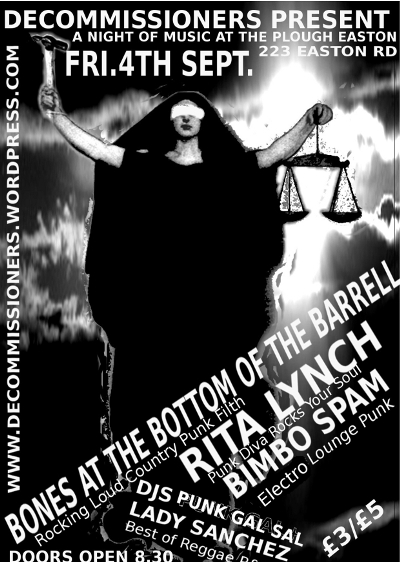 On the legal front, the state, or crown prosecution service, is now using a crack specialist team of prosecutors set up in the south east, who are clearly looking to take as many prisoners as possible. This is bad news. Defendants cannot necessarily rely on the state’s incompetence to get a not guilty, although there’s always the jury equation – presuming such bodies still exist by the time the case comes to trial. But seriously, this case is getting heavy in more ways than one. In one way its a lesson for us all, no matter how motivated you may be by the horrors of war and the bombing of complete innocents (in this case families & kids in Gaza), to act without a bit of planning and forethought is a dangerous move. As Bristol’s EDO 6 are now finding out.

If you do go out and cause massive damage to an arms manufacturer, and deliberately allow yourself to be caught (ie arrested), whatever your personal motivation, then be aware of the fallout after. You will face a long and complicated legal process, and possibly many months (maybe years) on remand or absurd bail conditions (and yes the notion of innocent til proven guilty goes out of the window as far as the state is concerned). The simplistic charges you think you may face ie criminal damage, can easily be adjusted, changed, abused, and whilst they may not stick in the long run they sure as hell are stressful when you are facing them. The Bristol EDO 6 now face a conspiracy charge as the main charge, and this has serious political and legal ramifications.

The ongoing Raytheon 3 case, which involves some EDO 6 defendants, recently had its committal hearing (to a crown court from the magistrates) adjourned until 17 September. At the same time we know the prosecution is trying to link the Raytheon 3 & EDO 6 into one overall criminal case. Why? Because it helps their claim of consistency and conspiracy, and they fancy their chances of a guilty verdict from the jury. The adjournment gives them a bit longer to arrange this link. At the same time, the prosecution are making much of the alleged involvement of 2 or 3 people from Brighton in the EDO 6 action. Indeed, their arguement is that 1 or more Brightonian not only conspired with Bristol’s 6, but is/was in fact the leader of a much larger conspiracy against EDO as a whole, and is claimed to be the leader of the anti-EDO campaign!

Of course the state is unable to grasp the non-hierarchical nature of the anti-EDO campaign, nor can they comprehend how 6 people from Bristol could impulsively act (however disorganised they may have been) to successfully trash a factory overnight. So they see a conspiracy, instead of for once a successfull cock-up. And here the brave, dramatic and successfull actions of the EDO 6 collide with an unfortunate reality – the state really wants to nail a few people in Brighton, by hook or by crook, and if they can use the chaotic nature of the EDO 6’s action to assist in this then they will. And all defendants will be the worse off for it, however unaware they may have been.

Of course here in the ABC bunker we dont care if the Bristol EDO 6, or the larger EDO 9, are guilty or not, they still deserve our full support as activists confronting the military-industrial-complex. And of course for taking on the legal might of the state as it goes all out to get those it has been chasing for a while – the state will go for a guilty plea for the 6, the 9, whoever, by any mean possible, and use every scrap of evidence available, however absurd it may seem. It is up to everyone outside of that case to provide as much support as they can, by any means possible on course.

Support the Bristol EDO 6! Support the wider anti-EDO campaign! Support the acts of opposition to the horrors and profits created by the military-industrial complex! Drop the charges, and free Elija (James) Smith now! We’ll see you in the Plough on Friday we hope! At Yate court on 17 september, and of course in Brighton when the court csae starts.