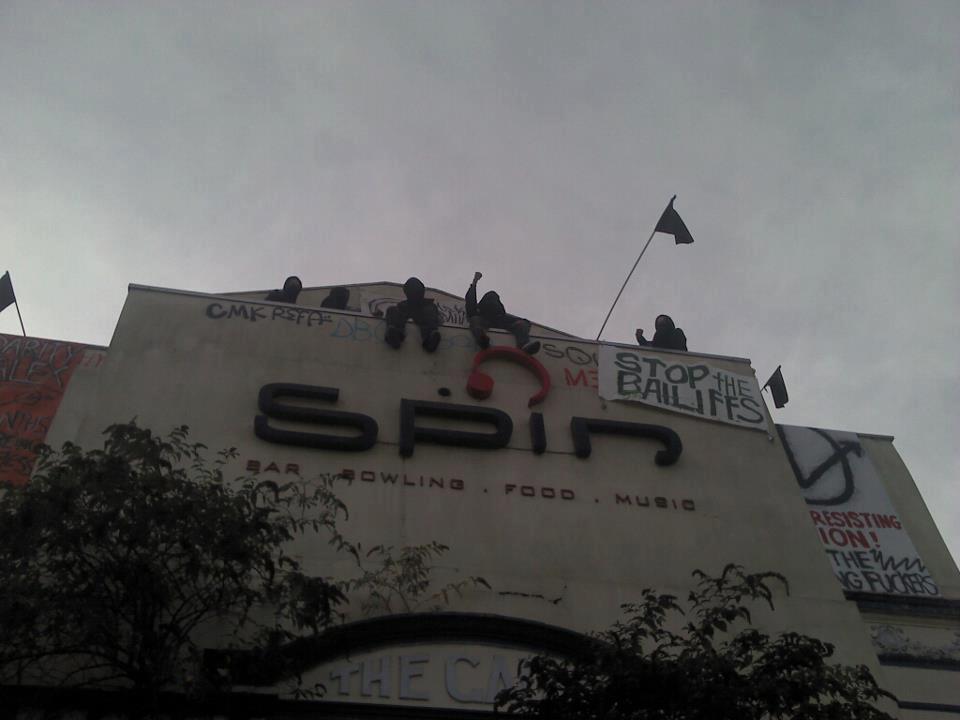 We the gremlins are squatting at Gremlin Alley, City Road, Cardiff; formally known as Spin Bowling Alley and the Giety Cinema and bingo hall.

Yesterday we successfully resisted an eviction from bayliffs and harrassment from police who attended for most of the day from 10AM. Banners including “We are resisting eviction: Fuck the fucking fuckers”, “Solidarity with Alex Haigh, imprisoned for 3 months for being homeless”, amongst others being displayed. Anarchists, DPAC, activists, travellers, local artists, plain-clothes cops and the public supported outside. We received donations from small businesses; after police left around 3:30PM, we put up black flags and more banners and continued our party on the roof. Anti-cop music was played from supporters opposite followed by a local band ‘Inconsiderate Parking‘ who played for hours with people dancing in the street in the day.

As we go into the weekend we are strengthening and re-inforcing existing security, with 24/7 surviellence. We welcome visitors, people to join us and continued support. Message facebook with a contact, email (welcometogremlinalley [at] riseup [dot] net), or if needed, phone Eviction Resistance on 07591415860 with your contact details as we sort out a collective phone. Updates on our website to come, including videos.

Solidarity with comrade Alex Haigh, fellow squatters and the Cuts Cafe crew in London who were evicted by TSG last night.