Echoing the large mobilisations of November 2008, when prisoners went on meal abstaining/ hunger strikes across the country, a fresh wave of mobilisations in the Greek prisons began last Monday 29 November, as first reported here. 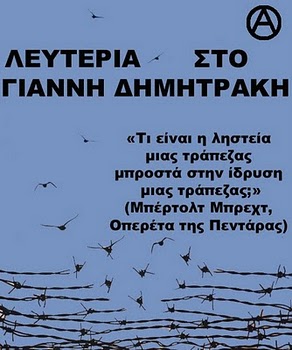 Solidarity poster for Dimitrakis: "What's breaking into a bank compared with founding a bank?" Bertolt Brecht (the Beggars Opera)

This comes as there is a fresh escalation of struggles across various sectors in Greece. December 6 marks the 2nd anniversary of the murder of the teenager Alexis, that led to weeks of street battles. There are then further protests leading up the next Greek general strike on 15 December. Many anarchists & anti-authoritarians in prison face trials in the next few months, starting with the appeal trial of Giannis Dimitrakis on 6 December – read the callout for solidarity. Perhaps unsurprisingly, over the last couple days there has been a huge crackdown by the state in major Greek cities with searches and arrests.

Here is a translation of the prisoners’ demands and call for solidarity, as posted up on Occupied London and Act for freedom now:

Since Monday 29th November the prisoners in Greek jails have begun an abstention from meals, which is to escalate into a hunger strike, as a protest against the political indifference that they are experiencing. The prisoners, with a press release of the coordinating bodies of all the prisons-hellholes in the country, submit their demands (analytically in the enclosed list) for de-congestion of the prisons, improvement in the conditions, real justice, less imprisonment:

Demands:
1. To stop the abuse of pre-trial detention.
2. Reduction of the statutory upper limits to continuous imprisonment
3. Abolition of devastating sentences and wider application of the measure of probation/remission and conditional release
4. Legislation setting the upper time limit of the statute of limitation for disciplinary sentences at 6 months – for these not to be used as restraining factor for conditional release.
5. The abolition of the anti-terrorism law and the special terms of detention for political prisoners
6. Abolition of under age prisons and the establishment of structures of protection for underage offenders
7. Immediate release of prisoners with special needs and those who suffer from chronic serious illnesses
8. Immigrant prisoners: (a)immediate and unconditional practice of their right to serve their sentence in their country of origin (b) immediate release of all those who are held for judicial or administrative deportation, c) immediate trying of all trials of greeks and immigrants in all degrees
9. Leave of absence: (a) granting of leaves of absence with the same preconditions for all, no to the unequal and discriminatory treatment, no to arbitrary rejections of applications. (b) increase in the duration of leave in all cases. c) granting of leaves at the 1/5th [of the sentence] for all offences and for all prisoners, including those who are serving sentences for drugs.
10. Improvement in conditions of imprisonment: (a) the right to dignity, health, education, communication, development of personality, free speech, exercise (b) the right to work, immediate opportunity of employment for those who wish to do so, without restrictions due to disciplinary measures c) increase of jobs and increase in the percentage accounted for the days worked [which is subtracted from the sentence] (d) application of measures alternative to imprisonment – expansion of the institution of rural prisons to include female prisoners (e) banning of physical examinations, especially vaginal and anal, (f) improvement of the conditions within holding areas, of transfers and of means of transport.
11. Abolition of monetary sentences (fines).

The Initiative for the Rights of Prisoners stands in solidarity with the just struggle of the prisoners and makes a call for individuals, collectives and organizations to an open meeting to coordinate our actions for the organisation of acts of solidarity for the prisoners’ struggle.