Kebele Sound Collective and friends brings you a punk and ska fundraiser supporting direct action defendants, with:
Cartouche – melodic punk from the barricades of Paris
No Choice – legendary anarcho punk from South Wales
Na No and the Nachos – skanking new ska pink band from Bristol 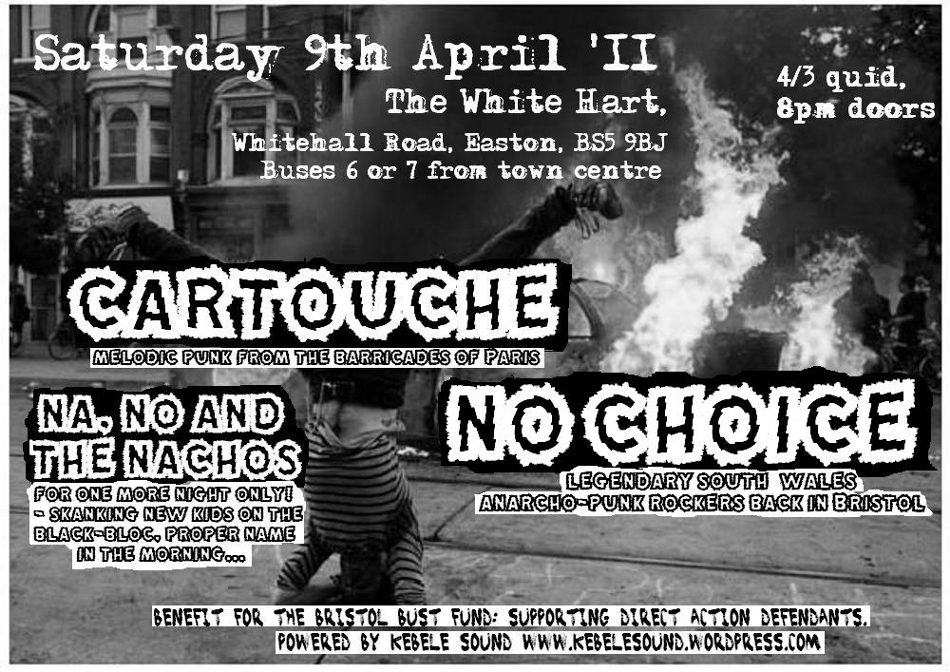 Here’s where the money goes:

G20 legal defence:
in June 2010 the G20 summit met in Toronto, Canada. Toronto-based organizations of women, people of colour, indigenous peoples, the poor, the working class, queer and trans people and disabled people organized a peoples convergence with 40,000 people taking to the streets, standing up for justice in collaboration and solidarity! Activists, community members, inspired and outraged individuals came together as a movement to demand justice for people and the planet. Over a week of mobilizations, events, workshops and direct actions took place in the face of extreme state and police repression and violence. Over 1100 people were arrested, and many are still facing charges and varying degrees of pre-trial punishment and isolation. To help cover the legal costs of those facing charges, The Community Solidarity Network has been organizing fundraising, but their goal is still a long way away from being met. For updates and information see: movementdefence.org and g20.torontomobilize.org

Bristol bust fund:
Supporting those arrested and facing charges resulting from demonstrations and direct action. Our solidarity is with all those who rebel, resist and revolt, from resisting the cuts to attacking the arms trade or from fighting fascism to taking anti capitalist action. In a time of widespread and growing dissent and resistance the state makes clear that anyone who doesn’t play by their rules will face the full force of the law. We support all those who in the face of escalating repression and attacks on us all continue to take to the streets and to struggle for a better world. The bust fund is to help pay legal and court costs of those on the sharp end of the “justice” system.
Some get along to support those in trouble for resisting, pick up some info and find out how you can help in future.