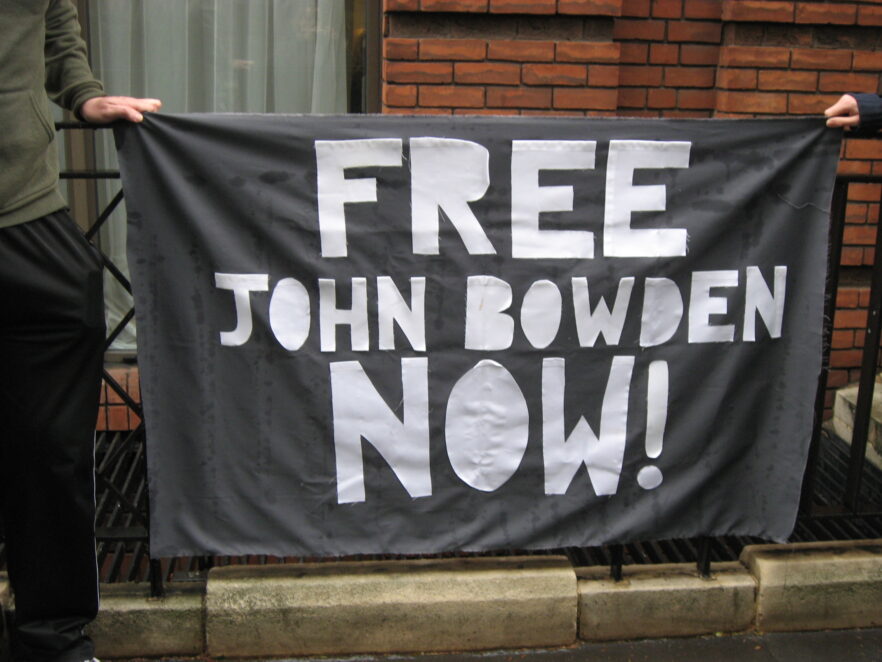 In 2007 my association with the Anarchist Black Cross was considered a compelling enough reason by the prison authorities to prevent my release, despite the subsequent exposure of the lies manufactured by a prison administration regarding the nature and activities of ABC.

In the summer of 2007 following my
transfer to an open jail, Castle Huntley near Dundee, after almost
three decades of imprisonment, a prison-hired social worker at the
jail, Matthew Stillman, submitted a report to the Parole Board in
which he claimed I was linked to what he described as a “terrorist
group”, specifically naming ABC, and had received visits from
“terrorists” also linked to ABC. As a consequence of Stillman’s
allegation I was transferred back to a maximum-security prison.

Following a campaign of protests on my
behalf by ABC, which included demonstrations outside the Scottish
Parliament and Scottish Prison Service H.Q. In Edinburgh, and an
investigation by Perth & Kinross Council into Stillman’s
allegations to the Parole Board, those allegations were exposed as
lies. Whilst being interviewed by a representative from Perth and
Kinross Council Stillman would claim by way of a defence that he had
been encouraged by senior management staff at Castle Huntly prison to
use the term or description “terrorist” when describing ABC in
the parole report. Stillman faced no disciplinary proceedings
following the exposure of his lies and was simply moved to another
social work council.

It would be several years before the
prison authorities would resurrect it’s lies regarding the
“terrorist” or “criminal” nature of ABC in an attempt yet
again to prevent my release, and once again prison-hired
“professionals”, this time psychologists, would be used to
present the lies as impartial and unprejudiced fact.

On the 9th June the
psychology dept at Shotts Prison in Lanarkshire carried out an
assessment of my case, ostensibly to decide my “level of risk” in
terms of danger to the community, and my suitability, or not, for a
return to an open prison. On page 21 of their subsequent
“Psychological Assessment Report” they wrote the following:

“Mr Bowden holds value in
communicating his political ideals and advocating change. He has also
used radical websites to identify Criminal Justice system
professionals (the allusion to Stillman is obvious) that he alleges
have abused their positions of authority. While he cites this to be a
feature of his views on authority in general and therefore feels
entitled to express his views and thoughts, this is an area that
should be further monitored by the relevant authority supervising
him. Mr Bowden has stated his intent to distance himself from
criminal associates, yet considers the Anarchist Black Cross groups,
to whom he is linked, to be non-criminal in their approach. At the
time of writing, there was no information available from the police
to confirm this. It should be noted however, that in 1992 he had
associates that facilitated his escape to Holland. His associations
should therefore be monitored in conjunction with the police. It will
also be useful to liaise with the police if concerns emerged in the
future about the approach of Anarchist Black Cross groups being
criminal in their intent”.

Firstly, ABC members played absolutely
no role or part in my escape to Holland in 1992 and there is no
evidence whatsoever to suggest they did, and secondly, following
Stillman’s lies regarding the ABC in 2007, Perth and Kinross Council
asked the police to provide an opinion of ABC and were informed it
was a “radical group” with “potential public order risks” but
definitely not “terrorist” in nature or unlawful in political
orientation. Once again the prison authorities here in Scotland are
attempting to criminalise ABC and punish prisoners linked to it.

I would ask ABC members therefore both
in solidarity with me and as a protest against their criminalisation
by a serial human rights abuser like the prison system, to e-mail and
send letters of complaint to the following:

Please send letters of support to: