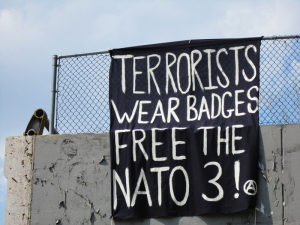 Three out-of-state men were sentenced to prison terms ranging from 5 to 8 years in prison today for making crude Molotov cocktails in the days before the NATO summit in Chicago in May 2012.

Prosecutors had sought 14-year terms for each of the men, raising the specter of the Boston Marathon bombings during their arguments at the sentencing hearing.

The so-called NATO 3 — Brian Church, Jared Chase and Brent Betterly — were convicted in February of possessing incendiary devices but were acquitted of more serious terrorism charges, a fact stressed by their attorneys. Church was sentenced to 5 years, Chase to 8 years and Betterly to 6.

Chase’s attorney, Thomas Anthony Durkin, contended that prosecutors didn’t seem to understand they lost the terrorism case and were trying to “salvage a lousy, rotten case” with stiff prison sentences.

“They still don’t get that the whole world is laughing at them,” Durkin told Judge Thaddeus Wilson.

A 48-page sentencing memo by Cook County Assistant State’s Attorney Jack Blakey, who heads the office’s special prosecutions bureau, said the trio have displayed a “defiant refusal to take responsibility for their conduct.”

Addressing the judge before he imposed sentence, Church took offense to the prosecution comparisons to the Boston Marathon bombings.

“I do love my country,” he said. “To be compared to an atrocity hurts, your honor. It rips my heart apart.”

Betterly apologized and said that anarchism isn’t synonymous with terrorism.

“We weren’t serious about much of what was said” in conversations secretly recorded by two undercover Chicago police officers who had infiltrated their group, said Betterly, who nonetheless insisted he was not ducking responsibility.

The idea that he came to Chicago with “hatred and violent intentions couldn’t be further from the truth,” Betterly said.

The three had faced between 4 and 30 years in prison. Their trial earlier this year was the first time Cook County  prosecutors had brought charges under the state’s terrorism statute, enacted after the Sept. 11 attacks.

But their attorneys argued that the three were “goofs” who talked big and were goaded on by two undercover officers.

“My mind, through a pot and beer induced haze, was never anywhere near even wanting to commit property damage, let alone blowing things up or burning things down,” Church wrote in a letter to the court that was excerpted in the prosecution filing.

“Those who know who I am, who understand the depth of my desire for truly progressive change and peace, know that I am not capable of harboring such mindlessly violent intentions,” Betterly wrote.

Prosecutors wrote that Betterly has continued to “defy and threaten” law enforcement while in jail, making  “an inappropriate racial comment to an African American correctional officer” telling another to “watch out pig” and also punching the window of a guard station and yelling “f— the police.”

While Blakey acknowledged that other defendants who had possessed Molotov cocktails in federal cases in Oregon and Minnesota were sentenced to no more than 4 years, he wrote the NATO 3 did not plead guilty and “have taken great pains to abdicate all responsibility for their conduct.”

The three are just as deserving of lengthy prison sentences as those convicted of trying to arrange a murder, Blakely argued.