“Prisoners Justice Day is…the day to remind people that the criminal justice system and the psychiatric system are mutually reinforcing methods that the state uses to control human beings.“

Prisoners’ Justice Day 2008 was commemorated at HMP Styal (Chester), in tribute to the work of Pauline Campbell, who protested outside any women’s prison in England and Wales where a prisoner had recently died. Pauline’s daughter, Sarah, died at Styal in 2003, within a day of being sent there. Pauline demonstrated outside HMP Eastwood Park (near Bristol) more than once against the deaths in custody at this women’s prison. Sadly, Pauline took her own life in May of this year.

The Campbell family’s devastating experience should be a reminder to us all that every crime has many victims, often including the ‘perpetrator’ and their family. It is the vulnerable people of the UK who end up in prison: working class men and women, often failed by the educational system which is so under-resourced it cannot address different individual learning styles and mental-health concerns; foreign nationals, at a disadvantage because of language and systematic racism; anyone who cannot pay for their substance addictions without resorting to crime; political prisoners prepared to put their freedom on the line to build a better world.

In solidarity with the event at HMP Styal this weekend, Bristol activists hung a banner at a junction 2 of the M32, to draw attention to the plight of prisoners in the UK and elsewhere.

For more information, see links below:

The Matrix Knowledge Group research into the economic case for and against prison interventions and their alternatives: http://www.matrixknowledge.co.uk/prison-economics/

…and criticism of the prison building plans from Rethinking Crime and Punishment:
http://www.lawgazette.co.uk/news/titan-prison-plans-under-attack 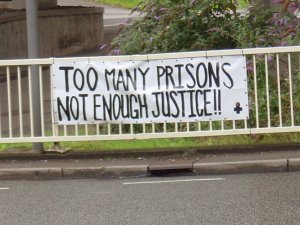 Too Many Prisons, Not Enough Justice!!