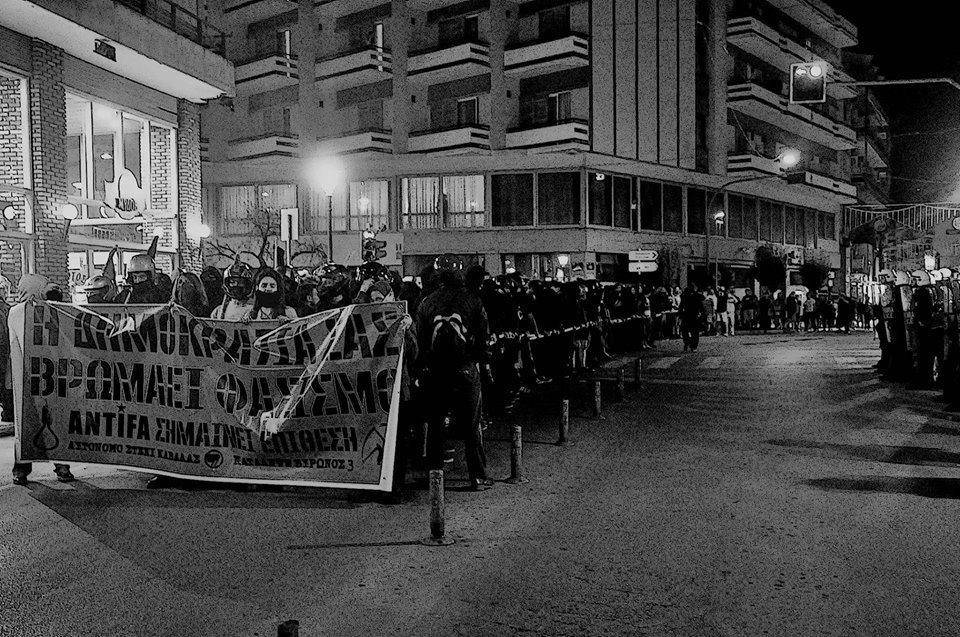 Comrades from Kavala, Greece will be speaking about the situation there to raise awareness and solidarity for their struggle
against fascists and state repression.

One of the comrades from Kavala is facing serious charges at an upcoming court case on December 9th and is in desperate need for solidarity and financial support.

Anti-fascists in Kavala have been some of the most active in all of Greece, organising demonstrations and actions against neo-nazi groups over the past years.

On Sunday 26th January 2014, a few hours before a scheduled anti-fascist rally, neo-nazis from the “Patriotic Movement” smashed up a shop owned by one well know anti-fascist and attempted to set fire to it, endangering the lives of those inside the building. After the intervention of local residents, as well as people from the surrounding nightclubs, the worst was avoided.

Our comrade, once notified of the attack on his store, went down there to see what had happened. A few moments later some plain-clothes police officers arrived, having been notified by the local residents. At that moment our comrade is informed that before the smashing and arson of his store, a clash had taken place between a group of antifascists and a group of members of the Patriotic Movement. The “Patriotic Movement” were guarding the public space of the Municipal Park to prevent any
anti-fascists from attending.

Though refusing to have anything to do with the police, our comrade for the purpose of insurance had to go to the police station. Whilst waiting for 3 hours he was informed that he was arrested for public disturbance. Apparently members of the Patriotic Movement in collusion with the police attempted to put the blame for a previous confrontation on him.

Not only were the Patriotic Movement attempting to control the streets and public spaces, they had after the incident violently attack two youths in a park and then proceeded to work with the police in making this claim against our comrade.

A few hours later the antifascist rally, organised by the Autonomous Collective of Kavala, Vironos 3 squat and individual antifascists, took place in Faliro Park. From the very first moment of the rally, the Park was surrounded by several riot squads (around 8 to 10) and many plain-clothes cops. As soon as the antifascists (150 to 170 people from Kavala and other towns) blocked the road in front of the park, police vans shut off the road, in order to prevent the antifascists to approach the Municipal Park, where at the same time the fascist gathering was
being held. Not only neo-nazi Golden Dawn members took part in the
fascist gathering, but also other neo-nazi groups, such as the National Socialist Army of Macedonia and other known and unknown fascists from Northern Greece.

After the events of that weekend, two comrades were held in custody for several days and face charges of “disturbance of public order with facial features covered”.

We hope that this tour can further make links between anti-fascists in the UK Anti Fascist Network and anti-fascists across Greece.

Please pass this on to your friends, comrades and networks. Let’s show our comrades they are not alone and we share the same struggle!