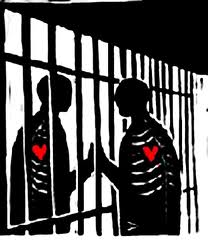 Feb 27th, 2013
from The Anarchist Black Cross of Peterborough

On Februrary 14th, 2013 Joel Bitar was arrested in his home in New York,
NY, occupied Haudenosaunee territory – as a result of an extradition
request sent behalf of the KKKanadian government, as the state seeks to
continue its repression in the wake of the resistance in the streets seen
during the G20 Summit held in Toronto in 2010.

Please see supportjoel.com for more information on the particulars
of Joel’s case and to get in touch to help support them through this time.

The implications of the collaboration between these two
colonial-capitalist States – illegitimate empires occupying stolen
Indigenous territories – is immense for our movements. We have understood
for centuries that oppression does not cease at a border, in fact it is
exacerbated, highlighted and enforced as they are used as an apparatus of
the State to dominate, exploit, steal, harass and oppress. The border
seeks to establish who is legitimate, who is legal and who is in charge.
The political cooperation of the AmeriKKKan and KKKanadian states is
unsurprising but has immense implications for targeted communities across
Turtle Island. The scramble on behalf of the KKKlanadian state to pursue
further persecution of international folks speaks to the level of fascism
in the political atmosphere north of the border. It is because no where is
safe, no where is neutral that we must be resilient through these times
increased and ongoing repression. We must work together to dissolve the
colonial border and ensure that our movements do more than overlap but
that we work together to build a world without borders, a world without
the prisons. It is for this reason that The Anarchist Black Cross of
Peterborough stands in solidarity with Joel Bitar and anyone else who may
be extradited – please know that we will support you, and that you have
friends here. We stand in solidarity with all persons who have been or are
currently incarcerated as a result of the G20 in Toronto – we stand in
solidarity with those who will not cooperate the with State and defy the
Grand Jury in the North West – and we stand in solidarity with all those
whose hearts, minds and bodies are antithetical to the current social
order of cis-hetero patriarchy, white supremacy and colonial capitalism.
To exist is to resist – their fear is why they seek to cage us, but
together we can break free from the chains that hold us back.