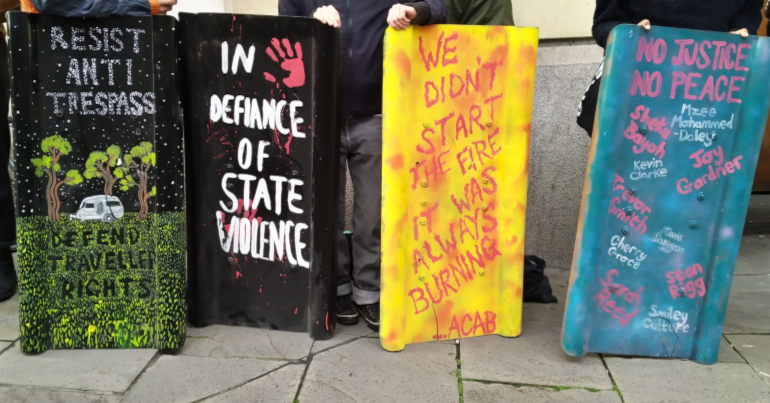 On Friday 29 October, Ryan Roberts was found guilty of riot and four charges of arson.

We continue to stand in solidarity with Ryan and all other defendants charged following the Kill the Bill demos in Bristol. We will give them all the support we can, whatever the sentences they receive.

Our hearts are heavy. We are full of rage. Ryan’s conviction only adds fuel to the fire of our hatred of the carceral system and our desire to dismantle it.

Ryan’s trial was the first time the events of that night were put before the courts. The court heard from a legal observer that “it was the actions of the police who pushed the crowd that caused the escalation.”

The court heard that police officers punched and kicked protesters. It heard that officers used their shields as weapons. The jury saw footage of a line of police officers in riot gear knocking two people to the ground, repeatedly hitting them with riot shields, and kicking them.

Under cross examination one officer stated:

Because as we’re said before – they only call it violence when we fight back.

But it is not a crime to fight back against police violence and state repression. We cannot stand to one side when people are beaten. And every one of us has a duty to stand in solidarity with those persecuted for fighting back.

The police, prison and courts system are trying hard to place barriers in the way of our solidarity. For example, on the first day of Ryan’s case Bristol Crown Court prevented Ryan’s friends and supporters from entering the courtroom. The choice to close the public gallery was a direct violation of the legal system’s own concepts of ‘democracy’ and ‘justice’. It was also an ideological attack on our solidarity with Ryan, and with all prisoners and defendants within the court system.

The repression people are currently facing in Bristol is just the start. This repression is set to get worse. The Police, Crime, Courts and Sentencing Bill, currently going through the House of Lords, will make it easier for the police to criminalise and imprison protesters. But the bill is not just about protest. We stand in solidarity with Gypsy, Roma and Traveller communities whose way of life is being outlawed by this bill. We stand in solidarity with Black people, already bearing the brunt of a racist police force, who will be disproportionately targeted by the stop and search powers in the bill. In Bristol, Black men are nearly ten times more likely to be stopped and searched than white men.

In Bristol and across England & Wales women continue to experience sexist & misogynistic behaviour, and – all too often – assault, at the hands of police officers.

We are under no illusions that the situation is stacked against us. The mainstream media and state narratives have served to demonise those that took part in the protest on 21 March. They have labelled people thugs for daring to fight back when they’ve been battered and pepper sprayed; when they’ve been bitten by dogs and seen their friends injured. The trial judge has already stated in the cases where people have pleaded guilty that the actions that night “dehumanised the police”. But it is the police who dehumanise us on a daily basis. Every stop and search, every baton strike, every arrest is another act of dehumanisation. It is the police who are the problem. Not those who resist.

But we will change that narrative. We will expose the violence the police showed not just that night, but in our communities, on our protests and on our streets on a daily basis. We will continue taking pride in each and every time people stand up and say enough is enough to state violence.