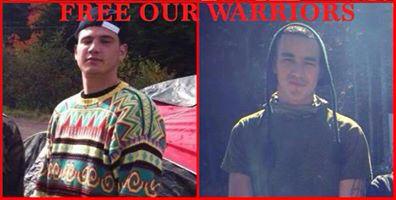 Junior Breau was found guilty of possession of a weapon for a dangerous purpose and 5 counts of pointing a firearm. Not guilty of 5 counts assaulting police with a firearm.

Aaron was found guilty of possession of a weapon for a dangerous purpose. He was found not guilty of throwing Molotovs,  intent to do bodily harm by causing an explosive device to explode, possession of explosives while prohibited to do so, and committing an offense while having his face masked.

They are currently the only two political prisoners of war in so-called Canada. They made a stance to not only protect the indigenous women, elders and children in their inherent territories but they were also defending the sacred land and waters for all people. They made their stance for the liberation of the Mi’kmaq nation and for the liberation of all indigenous people all over the world. To support our warriors please contact Suzanne Patles 902 217 0608 or Patty Crow 506 229 0373 or via Facebook inbox
Email transfers can be sent to healing_crow2010 [at] hotmail [dot] com

You can also organize a letter writing night, send in reading materials (like awesome zines from ZigZag  but no staples, glue, glitter or adhesives) or host a fundraiser!