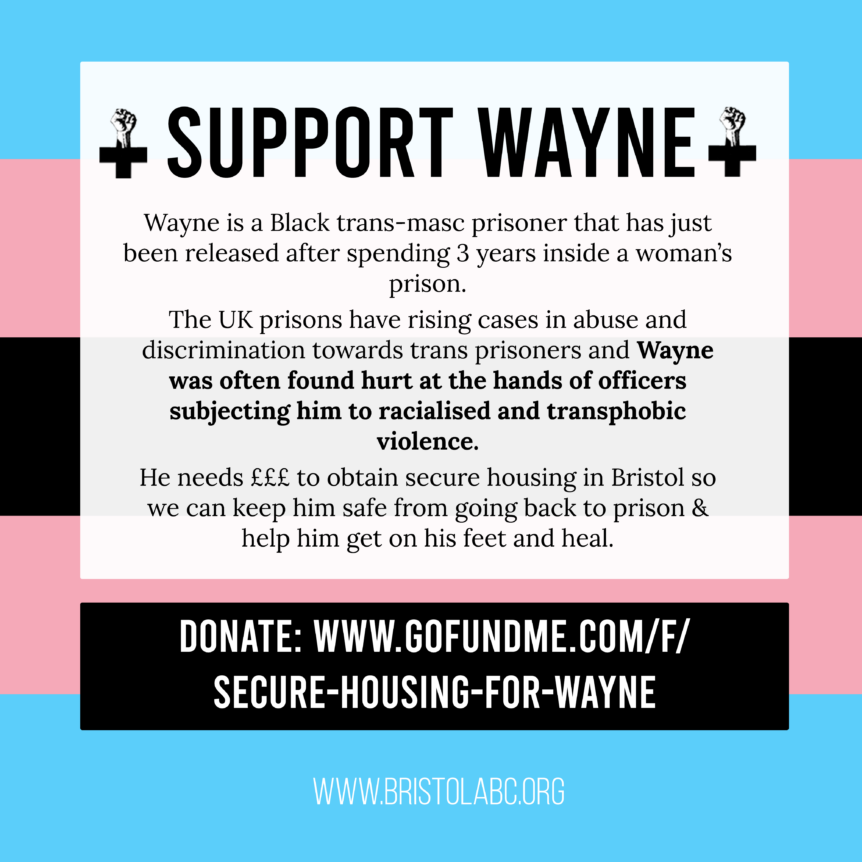 Bristol ABC and friends are trying to raise some money to support a specific person in urgent need for funds right now.

Wayne is a Black trans-masc prisoner that has just been released after spending 3 years inside a woman’s prison. The UK prisons have rising cases in abuse and discrimination towards trans prisoners and Wayne was often found hurt at the hands of officers. You can read more about the issues faced by trans prisoners here.  Since being out of prison the probation officers at the bail house have already tried to push to send Wayne back to prison although he hasn’t breached his licence conditions.

Funds will be used toward securing housing for Wayne so we can keep him out of prison where he is likely to experience even more transphobic violence.

Since being out of prison Wayne has been instantly expected to pay rent in bail house, although they are struggling to get basics like food and clothes, to get them self back on their feet feeling brighter.

The strict curfew time they put on people (7-7) when they exit prison ensures it’s almost impossible to find a job, and we want to support Wayne having breathing time away from stress with finances to allow him to digest and adapt from the last three years inside.

We want to support Wayne in ensuring they can pay their bail house rent and find a safe place to live in a house share (including deposit money). This is a country wide issue that people face when exiting prison, the prison system makes it extremely difficult to exist outside of prison for the first few vital months outside offering no money or basics to allow people to heal.

This would make a huge difference to Wayne and ensure he feels safe and supported by us and you. We are looking to raise 2k as housing costs in Bristol are on the rise and with convictions and no job it’s almost impossible to be accepted for a property without at minimum deposit and first months rent put forward.

Finding that for Wayne would be amazing.

Thanks to anyone who donates or shares 🙂