The Bristolians who took action to decommission the EDO military hardware manufacturer in Brighton need our support, and in particular the 2 who remain on remand.

We need to be clear that not only do they all face a serious criminal trial for their action, they also face a political trial. Not only because they themselves are making a political defence – that they acted to prevent the greater crime of war crimes – but also because any such action is treated politically by the state. The state cannot allow itself to be seen to tolerate in any way such an attack on the military industrial complex, also known as ‘making a profit from wars’.

Whilst the majority of defendants are at least out on bail and able to enjoy the support and solidarity of friends and other campaigners, 2 defendants remain on remand and that is not a good place to be. Getting locked up in the repressive prison system is not fun, particularly when you know the state wants to nail you. Being alone in prison can be quite scary, staring for hours at a ceiling or blank wall can begin to play tricks with your mind, and you need to stay strong. For that you need support. Every anti-war and anti-militarist campaigner needs to be clear that supporting fellow activists doing time should be an intrinsic part of their activity. It could after all be them one day soon!

So here are a few practical things everyone can do:

1. Write to the 2 defendants in prison. Even if you don’t know them, a simple postcard expressing solidarity would suffice. Maybe send an SAE too so they can write back. If you aren’t sure how to go about it see here and here. Write to:
Elijah Smith, VP7551 (his prison number), and Robert Alford, VP7552. Both at HMP Lewes, 1 Brighton Rd, Lewes, East Sussex, BN7 1E

2. Check out the defendants website and get in touch with the campaign. Help with publicity, fundraising, meetings, even the legal case. Whatever you can do. 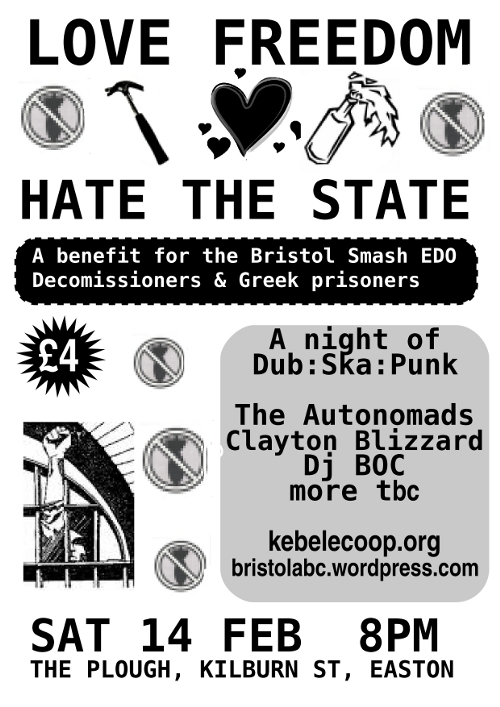 3. Sign their petition. Help put pressure on the authorities in any way you feel comfortable doing. Support and/or take other action against the arms race and wars.

4. Support fundraisers for the campaigns (and have a good night out too). We have made a small donation to the defendants campaign, and are helping out with a fundraiser at the Plough, in Easton on February 14. Do come along.

Solidarity with the defendants and their campaign!