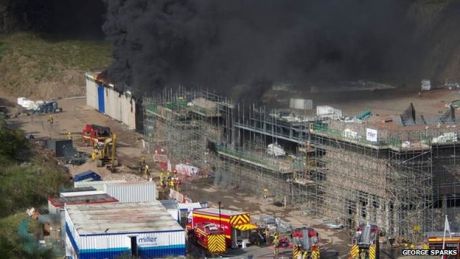 The smouldering remains of the Police Firearms Training Centre in Portishead, near Bristol following a visit from the “Angry Foxes Cell”

When the flames were lit that engulfed the Police Firearms Training Centre in Portishead, near Bristol it shocked the country. Never before in living memory had such a blazen act of insurrection taken place on British soil and aimed at such a high-profile target. The mass media went hysterical with talk of a “anarchist terror network” . The communique, originally published on Bristol Indymedia, was quoted around the world and quickly dubious links were made between the arson at Portishead and other attacks across the UK.

Following the arson our local right-wing rag, The Post, published an article claiming that Avon & Somerset Police were preparing to “crackdown on rioters and extremists” and are “monitoring several potentially dangerous groups”. They referred to a report by the Police with the rather Stalinesque title: “Our Five Year Ambition” in which they have said to have launched a series of operations to “gather intelligence about subversive organisations”. This was followed by another article, from the Editor himself, arguing that: “We should all support the police in their campaign against anarchists.”

This is clearly an attempt by the Police and The Post to threaten anarchists. We should expect to experience heightened levels of repression from the state, but that should not deter us from taking action against the oppressive system that controls our lives. The state, for as long as it has existed, has had a monopoly on the legitimate use of violence which it exercises through the Police. When another group of people use violence to achieve their goals the state begins to panic that it will loose its grip on society as it did in August 2011 when hundreds of people took to the street for several nights of rioting and looting without fear of Police violence.

The state is worried about another such outburst of anger as it could prove a threat to its power. Once people begin to realise that the state and the Police are not the only forces capable of using violence, the state looses all legitimacy. Because of this the state needs to crack down on any expression of violent tendencies before it can take hold and infect the masses. This is exactly what we are experiencing in Bristol and we should keep that in mind when we start to feel the full weight of Police repression.

We live in a violent society. The state inflicts violence on us every day through the Police, the courts, the prisons and army. The idea that a small group of people lighting fires in the dead of night can pose a risk to society shows how pivotal a role violence plays. We must remember that the violence we experience is nothing compared to the violence enacted by the state on a daily basis; in the prisons, in the courtrooms, in the police cells or in far-away countries through wars and occupations.

Heightened surveillance, sadly, has become a fact of life in our modern society. We are being monitored by CCTV cameras; through our phones and even by our social media outlets every day of our lives. The recent exposure of the NSA’s (the United States National Security Agency) PRISM program is just one example of how deep the roots of state control have dug themselves. The fact that the GCHQ (the British equivalent) has also tapped into this service should come as no surprise.

We must be cautious – with this in mind – of how we communicate with each other and what we say. Silence can be a powerful weapon in the face of oppression. While it is obvious that we, like the Police, have no idea who lit the fire at the Police Firearms Training Centre it is important that we don’t begin to speculate or spread rumours, that while untrue, could lead to people being arrested or worse.

The Anarchist Black Cross was founded in the early 1900s by Russian immigrants to support social struggles, mostly by providing support to political prisoners. Bristol ABC was set-up with similar goals in mind and thus we are ready to support anybody who becomes a victim of this witch hunt aimed at anarchists. We will provide material and financial support (where possible) to those who have fallen foul of the state’s oppressive legal system, regardless of whether they are innocent or guilty.

We would advise anybody involved in anarchist or radical activism in Bristol to read up on their rights, follow the links on our website, and be prepared. Prisoner support is a crucial role within our movement and one that must not be overlooked. If you can support Bristol ABC either financially or by writing to prisoners it will put us one step closer to building a strong, resilient community.

Until Every Cell Is Empty,
Bristol Anarchist Black Cross