2 of Bristol’s 6 EDO Decommissioners were re-arrested on Saturday at an anti-militarist protest (see photos) near Manchester. 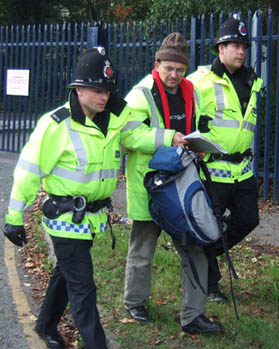 It appears they were picked up by cops for breach of their stringent bail conditions, namely that they should not communicate with each other. However witnesses stated they did not do so, they just happened to be in the same geographical area (a bit like when they are living in Bristol!), namely the public protest and rally, where they were listening to speakers. The 2 were Robert Nicholls and Tom Woodhead. After being lifted they were taken to nearby Oldham police station, before being transported to Brighton, where it is believed they will be in court on Monday accussed of breach of bail conditions. Additionally, a Brighton anti-militarist, who has also been implicated in the EDO Decommissioning case, was also arrested for the same breach of bail at the same protest, and is also likely to be in court on Monday. Respect to all those on the Target Brimar protest who walked afterwards to picket the police station.

Given that the 3 were all taken to the same police station, and were probably transported to Brighton in the same vehicle, then it seems they would have been placed in a much smaller geographical area together, where communication would have been practically unavoidable. So we wonder if the cops will now be taken to court for aiding and abetting peoples breach of bail conditions?

Meanwhile word has come in that the remaining Bristol Decommissioner on remand, Elijah (James) Smith, was ghosted out of Lewes prison sometime last week, and its believed taken to Doncaster prison. Doncaster is a higher category prison and is run by private prison scum company SERCO. ‘Ghosting’ of prisoners involves their sudden unannounced movement to another prison, and is an old trick by the state to stop awkward prisoners (like those that stand up for their rights, and wont take any old shit) getting settled anywhere or communicating their grievances to others. It also disrupts the prisoner’s support networks, such as letters and funds sent in, visits arranged etc. Its not clear exactly why James was ghosted? Especially as he was due back in court in Brighton on Monday 19 October, for an appeal against a previous anti-EDO protest conviction. Maybe they just wanted to mess up his preparation for the case? We’re sure James wont let the bastards get him down.

For news of planned protests to support the Bristol Decommisioners see here and here. And keep yer eyes peeled to find out where James is gonna be taken next!