(UPDATE – Elijah was released on bail from prison on Thursday 8 July. He can now be found out and about in Bristol. Welcome back. He remains on bail facing charges relating to alleged threats against Paul Hills, the EDO boss).

There has been much jubilation and celebration over the acquittal of 8 of the 9 EDO Decommissioners (6 from Bristol), and the fact that 8 of the 9 are now free to go where and when they please. If you haven’t been paying attention we wont be repeating the details here, but you can find all the news/info you want on Bristol Indymedia, Schnews, Smash EDO, and here. 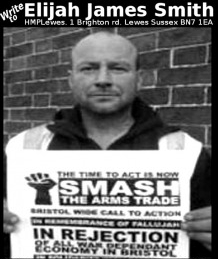 However 1 of the 9 remains in prison, thanks to the malicious nature of the British state and the CPS. Elijah (James) Smith has now spent nearly 18 months in prison, despite being acquiited of the EDO case, and getting 3 months for the Raytheon case (last Friday in Hove) – time he has already served of course. Elijah remains on remand due to the charge he faces of allegedly threatening EDO boss scumbag Paul Hills, at a previous court hearing in open court.

Elijah has a bail hearing this coming Wednesday, 7 July, in Maidstone, where the case was due to be heard. Apparently he will not be in court himelf, but his legal team will be. We wish him all the best, and hope he is out and about by lunchtime.

Whether Elijah is free or not, there will be a noise demo at HMP Lewes (where Elijah is presently held), also this Wednesday, at 1.30pm. If you can make it please get along with other former defendants and anti-EDO campaigners.