“In the morning of January 13th I was arrested in the west of Thessalonica, on the accusation of an explosion that took place at the commissariat of the municipal police. This happened a year after, an incredible accusation was created against me and three of my comrades in November 2007. That accusation put one of us in prison, and made three others escape. The witch hunt has started. We have lived through a considerably warm December and a situation that shows the lack of social peace clearly. Social peace only lives in the imagination of those that cannot understand that reality is characterized by a permanent civil war. With a revolutionary side that rebels against this democratic monstrosity. Rage replaced fear and instead of approval, negation appeared. The month of December, as a sign for times to come, made a very clear devision between those that feed the Power, maintain and defend it, and those that fight it. Now is not the time to look back in nostalgia to the ashes that the insurrection left on its path. We have to understand and express the signs of the present and the future. The signs that already exist, and those to come. The signs of a relentless social war. If we want that moments of negation, revolt and dignity are lived, we have to arm our hands and our desires, determined and organized. I resist against those who think that manifestations and pacifist protest will make a difference, because they’re already dead. They drag their corpses along the streets, in the unions and in the luxurious offices of their bosses. I take place on the side of those who are led by dignity and I join with those who feel the unchangeable will to disrupt and to destroy this enormous cemetery. The prison is an added step to a rebel. A step towards imprisonment. To all those who think that they have overcome me, that they have overcome us…

For me and my comrades it works just the other way around! Because as long as there are prisoners of war, we will continue to struggle. I send warm and rebellious greetings to my comrades and to revolutionaries everywhere.

Freedom for all prisoners of the revolt. Freedom for Yiannis Dimitrakis, Polis Georgiadis and Yiorgous Voutsi-Vogiatzis and all the hostages of democracy.”


Other news from Greece indicates a heightening of tension in recent weeks as the police and fascist groups continue their attempts to subdue protests, and fail! Alongside daily strike actions by different sectors of workers, occupations, protests and solidarity actions, there has been an increase in struggles linked to migrant workers and refugees, who are regularly persecuted by the Greek state. 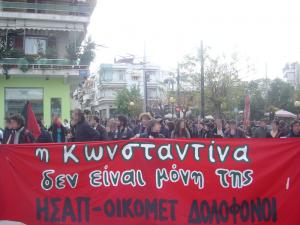 Banner reads: Konstantina is not alone...

Following the acid attack on migrant worker and cleaning union activist Konstantina Kuneva on 23 December by right-wing thugs, her union and supporters have been engaged in a series of successful struggles with their employer the Oikomet Corporation, and also took part in a one day general strike of public sector workers on 25 February.

On the night before that strike, a probable fascist group attacked a migrants centre in Athens with a hand grenade, whilst a meeting of conscientious objectors was in progress. Two subsequent solidarity marches have seen the offices of a right-wing newspaper trashed, and the HQ of the fascist New Dawn group burnt to the ground.

With the Greek economy in virtual freefall, even the reformist private sector union federation GSEE has called for a one day general strike. The heightened conflict of last December of the state and bosses, against workers, students, the unemployed and others could return any day. Which will mean many more arrests and prisoners on top of the approximately 250 already charged.