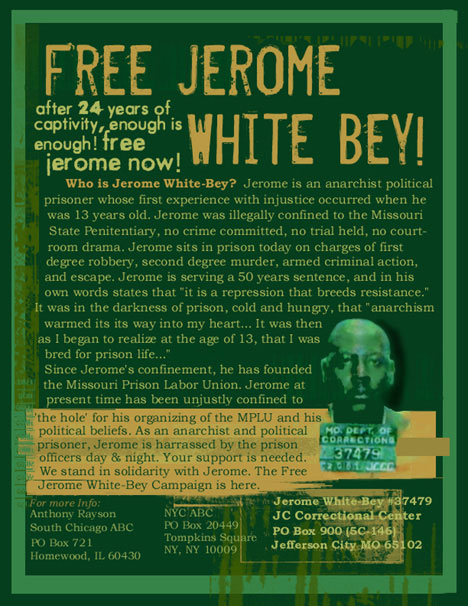 This is a call out for a new letter writing campaign to protest the treatment of Jerome White-Bey, who yet again is being held in isolation on the punishment blocks under a false investigation. His situation in his own words:

I would like to bring your attention to the abuse, harassment, and unjust treatment I have been receiving at the hands of prison officials over the last ten years or more here in the Missouri prison system. Beginning from the Director George A. Lombardi and Dave Dormire, Director, Division of Adult Institutions, and each warden at every prison I am sent to are all involved in a plot to harass, punish, and even maybe murder me, all because of my founding the Missouri Prisoner’s Labor Union here in the Missouri prison system. The abuses, the lies, the frame-ups, are well documented, yet nothing seems to stop the prison officials from harassing and abusing me.

It seems that the closer I get to release from prison the more aggressive they have become in their unjust treatment of me; here lies their two most painful and recent attacks. In 2011, my Custody Level was dropped from a Custody Level of C-5 to C-3 based upon good behaviour, so I was transferred to WMCC which is a Custody Level-3 Prison. While I was at WMCC, prison officials claim to have received a letter threatening the staff there by me, I was put in the ‘hole’ under an investigation, it was later proven that I did not write the letter, I received no conduct violation; but I was still punished for it because my Custody Level was raised from a Custody Level-3 back to a Custody Level-5 which places me into a maximum security prison that has extremely violent inmates, and orders were issued from the Director to the Classification staff, that my Custody Level is not to be dropped again; and I am to remain at Charleston prison until I am released from prison on December 25, 2015.

Now, while in Charleston, since 4/6/2012, I am in Ad Seg, under a false investigation claim. This time it revolves around prison officials who have claimed they received information my name was on some kind of ‘hit list’, so the claim now is I am in the ‘hole’ under an investigation for my protection, yet their records will show I have no enemies at S.E.C.C., but here I am in the ‘hole’ again unjustly. It means nothing to prison officials that I have not had any problem with anybody since I’ve been at Charleston; the investigation is nothing but a sham to harass and punish me. I have not made a request for protection, nor do I need it, so why am I in the ‘hole’? The Missouri Department of Corrections has a system in place to where they reward informants by placing money on their accounts for information received regardless of whether it’s true or not, and if it is on someone who is targeted, the more money the informant gets. Since my name is well known I am an east target for these people, giving the information to prison staff that they want to hear.

I am calling upon you to help me by writing to the following state officials demanding my release from Ad Seg., and a transfer back to a lower Custody Level. The Director George A. Lombardi and Dave Dormire should be fired, and the MDOC should be investigated for ‘hate crimes’. Please send letters of concern about my unjust treatment to the U.S. Department of Justice, and if you do, please mention and ‘CC’ the Missouri State & U.S. Senators/Representatives herein listed, and feel free to write to me here as well.