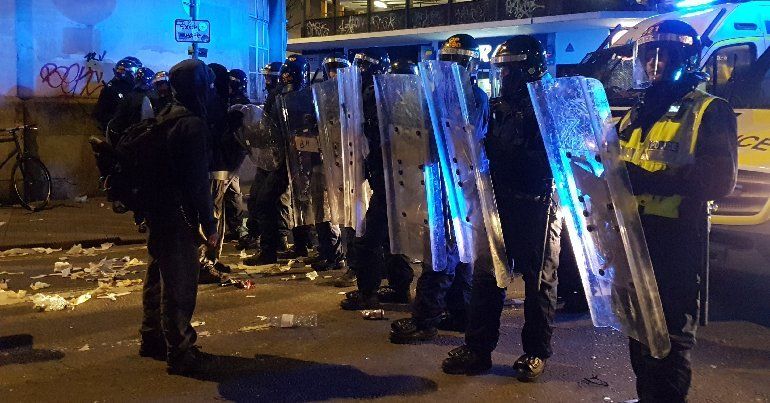 On Friday 30th July, five people were sentenced to over 14 years between them. Four people were given sentences of over three years for riot.

These five people are the first to receive custodial sentences for the confrontation with the police outside Bridewell Police Station at the Kill the Bill demonstration on 21st March. However, over 75 people have been arrested, 28 of them have now been charged. Two people are currently on remand in Horfield prison.

What happened on 21st March was an outpouring of rage against the violence of the police. The crowd fought back after police officers attacked the crowd with batons and riot shields. Pepper spray was used indiscriminately, people were charged with police horses. The protesters fought back, seizing police riot shields, helmets and batons to defend themselves. By the end of the evening several police vehicles had been set on fire.

We are writing this statement to make clear that we support those who have been sentenced today, and that we are proud of them for fighting back. We need to be ready to defend ourselves against the police, and stand with those facing repression and criminalisation.

Communities across the UK face violence at the hands of the police every day, but they only call it violence when we fight back!

The demonstration on 21st March was against the Police, Courts and Sentencing Bill, a bill which aims to give the police even more power to repress political dissent, and which will destroy the ways of life of Gypsy, Roma and Traveller Communities in the UK. Those who have been struggling against the Bill across the UK are resisting the expanding imbalance of power between the state and the people, and against the further criminalisation of one of the UK’s most marginalised communities.

The clash with the police on 21 March happened in the context of rising anger and action against the British police’s racist, classist and misogynist violence, and a government response to the coronavirus pandemic which left the UK one of the worst hit countries. The brunt of the Covid-19 crisis has been felt by working people and those seen as disposable by the government.

Bristol was a focal point of the UK’s Black Lives Matter protests last year when over 10,000 people marched through the city and pulled down the statue of slave trader Edward Colston before throwing it in the river – an action that had taken inspiration from anti-racists in the US. Similar actions took place all over the world against other monuments of colonisers in a wave of anti-racist organisation. Yet the police’s racist violence continues unabated. This year two Black men – Mohamud Hassan and Mouayed Bashir – both died after being detained in police custody in Cardiff and Newport. This is nothing new, there have been 1792 deaths in police custody or following contact with the police in the UK since 1990. And in Bristol, if you’re Black you are seven times more likely to be stopped and searched by the police.

Throughout March 2021 – in the weeks leading up to the March 21st Kill the Bill demonstration – weekly vigils had been held for Sarah Everard, who was murdered by an officer from the Met Police.

The Policing Bill aims to further criminalise those who defend themselves against police violence, doubling the maximum prison sentence for assaulting a police officer, while the police are able to use violence and even kill with impunity. Sentences for damaging ‘national monuments’ such as statues of slave traders will be increased to a maximum 10 year prison sentence.

The Bill also aims to massively increase the number of people in prison in the UK. At the moment, most people are released from prison after they have served half their sentence. If the Bill is passed some defendants will have to serve two-thirds, and courts will have more powers to impose long sentences against those under the age of 18. These measures to lock up more people go hand in hand with state plans to employ 20,000 more police, to build six new mega prisons and 18,000 more prison places in the UK.

The Policing Bill is an attempt by the state to increase its repressive powers to attack our communities, and to lock up even more of us. Our movements need to build our own strength, to defend ourselves and to fight back like the Bristol Kill the Bill defendants did on 21st March.

As we have seen, Bristol will not stand by silently. The people of this city know how to resist. We need to organise to support those incarcerated, but we need support from comrades across the UK and internationally to do this, please consider donating to our crowdfunder here: https://www.gofundme.com/f/ktb-prisoner-support-fund