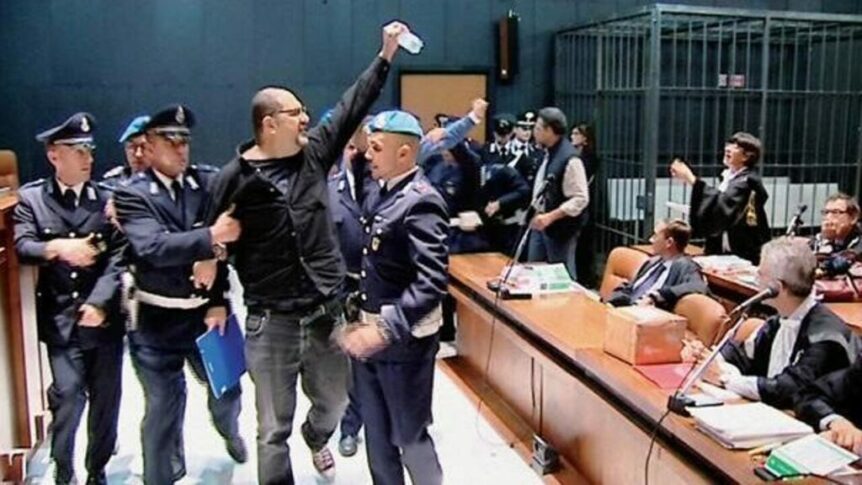 On the 20th of October 2022, the anarchist Alfredo Cospito, during a trial at the Sassari Probation Court, made an attempt to read an articulate statement in which he announced his decision to begin a hunger strike against the 41 bis prison regime to which he is subjected and against the hostile life sentence imposed on him. A battle that Alfredo does not intend to stop until death. The comrade, who has been subjected to 41 bis since last May 5th following a decision signed by the Chied Justice Marta Cartabia, is now being held in the Bancali prison in Sardinia.

Alfredo Cospito is an anarchist who has always been at the frontline of struggle, unwilling to ever compromise or give up. He is a comrade who has been fighting since the late 1980s, a period in which he was imprisoned as a “conscience objector” (I. e.for refusing to serve in the compulsory military service) and who, after his arrest in 2012, during the trial that followed, claimed the kneecapping of Ansaldo Nucleare CEO, Roberto Adinolfi, carried out by the Olga Nucleus/Informal Anarchist Federation-International Revolutionary Front (May 7 of that year in Genoa).

Alfredo has always been active in the defense of comrades hit by repression, in every corner of the world. His struggle objectively concerns all convicts, amongst whom we particularly remember the three militants of the Red Brigades (for the Construction of the Combatant Communist Party) locked up for more than 17 years in 41 bis (Nadia Lioce, Roberto Morandi. Marco Mezzasalma). In 2009, comrade Diana Blefari, from the same organization, committed suicide after the period spent in this harsh prison regime.

Alfredo has been in prison uninterruptedly for 10 years, which he spent in High Security sections until his transfer to 41 bis. In 2016 he was involved in “Operation Scripta Manent”, accused of subversive association for the purpose of terrorism and multiple explosive attacks. Following a Supreme Court verdict in July this year, the sentence for Alfredo and Anna Beniamino was re-formulated to “political massacre”, which carries life in prison as penalty.  The Italian state that has always been protecting fascist mass murderers now wants to condemn two anarchists for  an attack that caused neither victims or injuries.

For many years, Alfredo has been contributing articles, editorial projects and proposals to the international anarchist debate. For this reason, he has been censored several times and banned from communicating with the outside world, being condemned for the publication of the revolutionary anarchist folio “KNO3” and the latest edition of “Anarchist Black Cross”. He is currently under investigation for the publication of the anarchist newspaper “Vetriolo.” After this, the 41 bis regime was imposed on Alfredo this last May and subsequently he has been transferred from Terni prison to Bancali prison in Sassari. This prevents him from any contact with the outside world.

The 41 bis prison regime is used to completely isolate the prisoner from the outside world. This-measure is imposed for four years, but in fact the only way to escape from it is to repent and co-operate with the repressive forces. In other words, 41 bis is torture, as it is designed to induce suffering for the purpose of extorting confessions or statements.

This prison regime implies one hour of visit per month (with glass partitions, under electronic surveillance, and with audio/video recording). If family members do not have the opportunity to visit the prisoner, a monthly 10-minute phone call is allowed as an alternative to the prison visit, but in order to do so, the family member of the detainee must show up to a Carabinieri station or a prison. In addition, there is only one hour of yard time and social time within the section, which take place in groups consisting of a minimum of two to a maximum of four prisoners: the division into groups is decided directly by the bureaucrats’ offices in Rome and in applies for several months.

The 41 bis is a prison regime of annihilation, is designed to cause physical and mental harm through the technique of sensory deprivation; it is a political and social death sentence designed to break all forms of contact with the outside world. Alfredo’s treatment reminds us of the words attributed to Benito Mussolini on Gramsci: “This brain must be prevented from functioning for at least twenty years”.

Exemplary of the black hole into which one ends up once one enters 41 bis is precisely what happened on October 20th during the hearing at the Sassari probation court. At the hearing, the sympathizers were prevented from entering the courtroom, the comrade was connected via video conference from prison (as prescribed by 41 bis rules), and when he attempted to read his statement, he was silenced simply by pressing a button. The statement has been secreted by the judge; should his lawyers release it, they would risk a heavy criminal sentence.

The story of comrade Alfredo Cospito is entangled with the increasingly dark repressive climate in the country. Outside the anarchist movement, we are also witnessing a sharp increase in re-pression against workers, students, and social movements. Let’s cite the most striking case: this summer, the prosecutor’s office in Piacenza opened an investigation against trade unionists ac-cusing them of “extortion” (they were demanding, through a “radical” struggle of pickets and roadblocks, pay rises from the boss).

Let us be clear: the repressive penchant that the Italian state is taking, affects everyone person-ally; a precedent of this magnitude in the heart of Europe could be a harbinger of further repressive rushes in other latitudes as well. All this is happening while the social and international military crisis are getting worse by the day. We know that these are the ideal contexts for governments to implement authoritarian turns. We have a few weeks to save Alfredo Cospito’s life, to prevent his assassination, but most importantly to give a signal of counterattack to what is happening. The state is responsible for the life and health of our comrade. Let us mobilize around the world, let us pressure the Italian state so that Alfredo can be released from 41 bis.