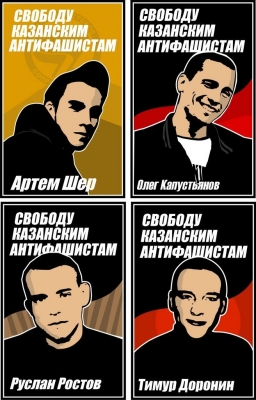 Four anarchist anti-fascists from Kazan, Oleg Kapustyanov, Ruslan Rostov, Timur Dornonin and Artyom Sher are currently in remand prison. Fifth suspect, Dmitri Ilichev is under traveling restrictions. Goal of the imprisonment is to pressure them to plea guilty.

This year Universiade, international competition of the university sports, which finished 17th of July, was organized in Kazan. For the mainstream media, this was a merry and long waited sports event. But for inhabitants of Kazan, it was a torture, and for social activists of the city, it was a plain hell.

And the hell began 3th of April, when officers of Kazan «E-Center» (Center of Counteraction against Extremism») searched homes of four anarchist anti-fascist students — Dmitri Ilichev, Oleg Kapustyanov, Ruslan Rostov and Artyom Sher. All four were arrested. Only in the police station they were told that they were suspected of having taken part to a fight which took place one month before.

Police told them, that in night of 24th of February 2013 four masked persons beat up two young men, whom police itself considers far-right football hooligans. As is the habit in Nazi circles, they immediately went to the police station of Tankodrom district to report the incident.

After arrest, four anti-fascists were taken to building of the police headquarters of the Republic of Tatarstan. In a police lineup, one victim and one witness recognized suspects as the attackers. This although the police admits that fight too place at night, and attackers were masked. This is why Nazis claim they recognized attackers «from form of their eyes».

Lawyers found out, that Ilichev, Kapustyanov, Rostov and Sher are suspected of having committed crimes according to statute 116 part 2b (battery), and statute 213 part 2 (hooligan, committed with motive of ideological hatred) of the Russian criminal codex. According to officers of the E-Center, arrested are members of the «informal youth group Antifa».

4th of April 2013 the Sovetski district court of Kazan admitted request of S.E. Smirnova from Tankodrom Police district to remand Oleg Kapustyanov and Ruslan Rostov for a month. Two weeks later, Artyom Sher, who has Israeli citizenship, was arrested as well. Dmitri Ilichev is under traveling restrictions.

After raids, Artyom Sher went to a hospital in order to document torture, as he was beaten up by one of the officers of the E-center that day. Ruslan Rostov gave testimony during the first days of the arrest, that there were several violations during police lineup: before the process, E-Center officer Sergei Simonov photographed him with his mobile phone, apparently to make it more easy for the victims to recognize him.

Ruslans request to change clothes between other persons in the lineup were refused, they were also of different height and frame than his. Kapustyanov refused to give any testimony, citing statute 51 of the Russian constitution.

Other accused, as well as their relatives and workmates, may testify that in the night of 24th of February students were either home or at work (one of them was working as a barman in a nightclub). However investigator Smirnova claims she has been too busy to interrogate defense witnesses.

Timur Doronin was arrested 21st of May 2013 at his home in the city of Zelenodolsk, suburb of Kazan. He is studying in Kazan and is playing in punk band “Yunost”. According to his mother, Timur was arrested simply because he has a valid drivers license and his family has a car. Center of Counteraction against Extremism (“E-Center”) which was searching his home, claimed that he was driving a getaway car in some fight. Timur is now the fifth suspect in the case. He refused to give any testimony, citing 51st paragpraph of the Russian constitution, which allows one not to give testimony against itself. He was also remanded.

In the end of May, the case was passed from Tankodrom police district to Central Administration of Investigations, but the new officer Vafin in duty, just as Smirnova, is not doing anything to proceed with the case

27th of May arrest of all the suspects was prolonged to 2nd of August. Anti-fascists have already spent 4 months in prison because of fabricated accusations. Only reason of the arrest is to pressure them to plea guilty. E Center officials are simply torturing arrested anti-fascists, they are kept in horrible conditions without any progress with their case.

It was the Universiade which triggered the repressions. But not only arrested students were victims, all the inhabitants suffered. Construction workers died in building works, homeless dogs were poisoned, public sector workers were plaid late, huge corruption, endless traffic jams and infrastructure, built with maximum speed and minimal quality — that is what Universiade means for average Kazan inhabitants.

City was filled with police officers, brought from neighboring cities and even regions. Even in daytime, it was impossible to walk through the city without having ones documents checked. In the nighttime, every police was eager to search passers by. Every flat in the radius of 500 meters around Universiade sites was inspected 2-3 times in prior to games.

In the universities, exam period took place few months before usual, which sharply cut the curriculum. It was done in order to expel students from other cities during the games. Many school pupils and public sector workers were forced to attend the games, with threats of sanctions in case they refuse.

And this is just a small example of all the restrictions and clear violations against the rights of the people, which took place before and during the Universiade, and which become such a common occurrence that we almost got used to them. But still, I may say that we, inhabitants of the city, deeply hate Universiade!

Addresses of the prisoners for support letters:

Name of the prisoner should be written in full official form, with a patronymic:

A report of the support group «Duty» from 2nd of August 2013
29th of July Vakhitovskiy district court of Kazan prolonged arrest of four Kazan antifascists (Kapustyanov, Rostov, Sher and Doronin) until 4th of October. They will stay remanded for two more months.
Anti-fascists have been in prison since April and May. They have still not been officially charged with any crime, and one of the victims has disappeared from the city. One of the reasons for prolonging the arrest was also claim that expertise on the confiscated computers has not been finished. Expertise of the rest of the confiscated property was already conducted, but nothing «extremist» was found. Arrested are still pressured to plea guilty, which is yet another proof that there is no any substantial evidence against them.

1st of August there was another court on the case of beating up of Alesya Sidenko, leader of Kazan section of Nazi group «resistance», Kapustyanov is accused in this case. This case has been going on since March 2012, from time to time investigations have been halted and from time to time the case has been reopened, depending on interests of the investigators. Currently police is using this case as an additional instrument for the purposes of the main case against Kazan anti-fascists. Witnesses of the prosecution did not came to this court session, next session will be 19th of August.

Approximately 200 000 roubles (4700 euros) are needed to pay for the lawyer costs of August-September. Currently local support group has only 50000 roubles, that is, ¼ of the demanded sum. You may donate to costs via ABC-Moscow, read http://wiki.avtonom.org/en/index.php/Donate for guidelines.