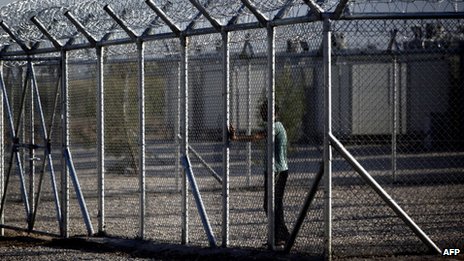 Greek riot police have been deployed to end a riot at a migrant detention facility north of the capital, Athens.

Detainees threw stones at the police guards, injuring at least 10 of them, and set fire to their bedding in what police called an “unprovoked” attack.

The rioting began when the detainees were informed that the maximum time they could be held at the facility had been extended from a year to 18 months.

Some 1,500 are kept under guard at the Amygdaleza “closed hospitality centre”.

It is one of several facilities set up since last year by the Greek authorities to repatriate the thousands of undocumented migrants in the country.

Human rights groups say migrants have been subjected to abuse by guards at the camps, and that they have been denied proper healthcare.

Last week, Muslim detainees were beaten during prayers, while an Afghan detainee died in July of an infection that had been ignored by months, according to the leftist KEERFA movement.

It is thought that up to 95% of undocumented migrants entering the European Union arrive via Greece, and because border controls make it hard to continue into the rest of Europe, many end up stuck there.