On October 1 in Holland a ban on squatting was controversially introduced, making it technically illegal. For many years Holland has been perceived as a liberal nation in its attitudes to issues such as squatting, dope and sex workers. But like many European nations, recent years have seen the state moved further to the right by its political masters, and the peoples’ gains from previous cultural and class battles slowly eroded. 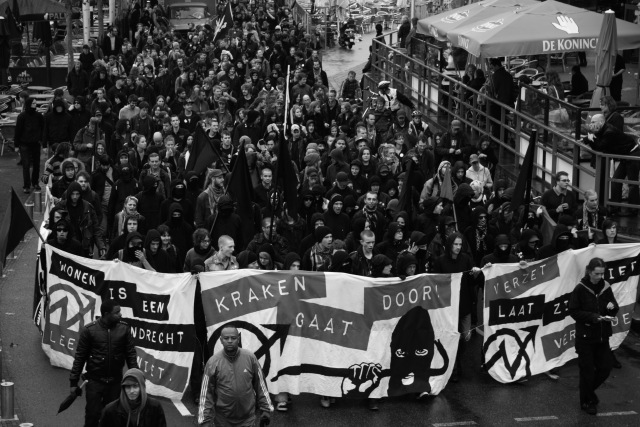 October 2nd -around 600 people demonstrate in Nijmegen against the squatting ban. Confrontations with the police. 13 people get arrested.

The ban on squatting has provoked serious anger. It has been confronted on a number of levels – on the street, in the courts, and of course by squatting more empty houses. There have been quite a few arrests, and a number of squatters who have refused to give the cops their identities have been remanded in prison awaiting a court date, whilst some others have received sentences such as ‘community service’! A report has been published listing a variety of actions and protests during the period October 1 to November 14. Read the timeline of actions report, which includes a number of links.