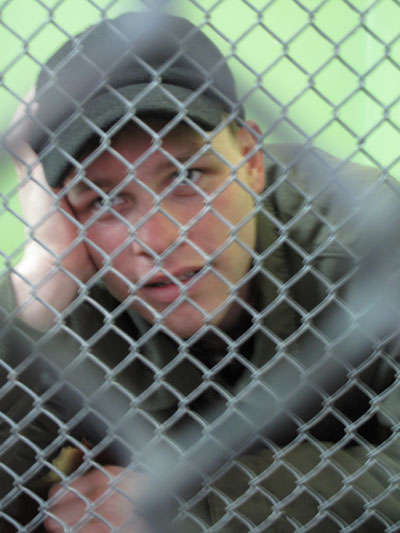 Jock Palfreeman, a young Australian anti-fascist currently serving a 20-year prison sentence for defending 2 young Roma lads being brutally attacked by fascist thugs, was attacked along with a group of his fellow prisoners on October 17. Here is a statement released by him:

On the Bulgarian Prisoners’ Rehabilitation Association’s blog I have up until now not written much if anything about myself in an attempt to keep the Association’s blog neutral and equal for all issues and prisoners in Bulgaria and specifically Sofia Central Prison. However, I have done this at the expense of not reporting the prison’s
attacks against myself for my unionism and solidarity with other prisoners, in an attempt to reform the corrupt prison administration, however on Thursday 17th of October an incident occurred involving myself that must be published.

At 8.30am a guard was counting prisoners for roll call, he quickly entered a cell and demanded that all 11 occupants exit the cell into the cold corridor, but before 10 of them could react he quickly left the cell and locked the door (the speed in which he left and locked the door made it evident that the guard was looking provocation). I Jock Palfreeman was not asleep but the guard did not see me as I had just exited the toilet and I was standing behind him in the guard’s blind spot, the guard swore at the 10 prisoners and said “now you’re going to see what will happen to you”. However when the guard locked the cell door, I immediately banged on the door as it was getting close to when I had to go to my university studies at 9am. One of the guards shouted “you’re too late for roll call”, I replied “I’m not too late I have been up since 7am, you just didn’t see me as I just left the toilet, I was standing behind you”, the guard from the previous shift told me that he would open the door for me, but the guards started arguing with each other, one wanted to open the door, the other wouldn’t let him. The guards left the block at about 8.45am. I sat down and waited to be let out to go to the study room, but at about 8.50am 50 guards rushed into the cell, took all of us out of the cell, 11 people, all of whom had not been in bed since the argument with the guard at 8.45am. The guards took all of us into the corridor and started viciously beating all of us. They used their boots, batons and also punches with their fists, they also took us by the hair and rammed our heads against the wall, myself included. They lined us up against the wall and about 50 guards started beating everyone from behind. We were 3 Iranians, 6 Iraqis, 1 Sudanese and myself – Jock Palfreeman – citizen of Sofia Central Prison. The guards were comprised of two shifts, from the days of the 16th and the 17th There were 2 commanding officers and 2 sub-commanding officers and the rest were normal prisoner guards.

During the attack I was shouting “this is a crime” and other prisoners were shouting “Why?”, because they did not speak Bulgarian, all they could say was “Why?”. After the attack had finished, I started to explain to the commanding officer that I didn’t have anything to do with any problem, the guard making the roll call had simply not seen me and that after I explained the situation to him he had refused to re-open the cell door again and that I had the right to go to the study room at 9am. As I was explaining this, the same guard from the roll call, burst through the other guards, grabbed my shoulder from behind and started hitting me in the stomach and upper body. After this individual guard had finished beating me the commanding officer started threatening us, he said “I
don’t care about the human rights organisations, I don’t care about your embassies, this is Bulgaria and we will beat you when we want”, I started to argue with him and he shouted “Shut up or I’ll cut off your beard and shave your head”, this threat perplexed me as it seemed out of context for the violent environment the guards had just put us through. I was shocked into silence as the threat was just so random and although very illegal, somewhat comical.

We were put back in the cell and the guards left. At 9.05am a group of us went to the bars that divide the block’s corridor from the stairs that leave to the block’s
exit. Several prisoners wanted to go to the gym as it was their allocated time at 9am, others wanted to go to the Bulgarian language lessons also set at 9am, and I wanted to go to the study room for my own studies. But the same guard from the morning roll call refused to open the corridor gate and instead ran away. I believe that he thought that everyone was coming to him in a big group so as to seek revenge for his previous attack against 17th cell. The guard was an old guard but new in Sofia Central Prison and so as is typical in Bulgarian institutions, none of his superiors properly instructed him to the fact that at 9am many prisoners have to leave the block to go to their respective activities (which aren’t many so should not have been hard to have known). So the guard
upon seeing people gathering around the gate ran and called the commanding officer thinking that a group was assembling for revenge for the guards’ earlier attack. We could hear him on the phone downstairs telling the commanding officer that a large group of prisoners are at the gates and that he needed help.

About 5 minutes later (which is amazing reaction time considering it can take over 30 minutes for medical help) 30 guards came running up the stairs and they assembled outside the gate of 10th group. They told all the prisoners to go into their cells, which all the prisoners did, including myself. The guards then tried to open the gate but they soon found out they couldn’t. I looked out of my cell and saw that there was a pad lock on the inside of the gate that the guards couldn’t reach. They tried by force to open the gate by barging it, but the padlock wouldn’t break. I then realized that this was my only opportunity to call for external help. I took my prison phone card and went to the phone in the corridor about 2 metres from the gate where the guards were and I called a lawyer, the Bulgarian Helsinki Committee and the Australian consulate. The guards started banging on the metal gate with metal rods, shouting and they also turned
on the block’s siren to try and drown out my conversation with the consul and the lawyer. I told them one by one “please come ASAP, the guards beat us at 8.45 and they’re coming again to beat us”. After I made my phone calls I returned to my cell at 9.11, we know the exact time due to the recorded phone calls.

A prisoner from prisoner maintenance Budimir Kujovic came and cut the lock off the gate at about 9.15am and the guards ran into the empty corridor as if they were charging down for a rugby ball despite the total lack of aggression from the behalf of prisoners. They locked all the cell doors and entered 17th cell, my cell. They again started beating everyone with batons, punches, kicks and ramming heads against walls. After they stopped beating us I asked the sub-commander “why have you come back to this cell? Why are you angry with us specifically?” the sub-commander replied “you (collective ‘you’) have made us come back twice today”, I said “we didn’t make you come one time, people wanted to go to their work and the gym and that guard called you here”.

Despite the beatings I was completely calm as were the other 10 prisoners. They
handcuffed us all and they said “ok now we will start the search for telephones”. 5 minutes into the search I was taken out of the block and put into a temporary holding cell on the other side of the prison. I asked the arresting officer “why have you restrained me in handcuffs?” he replied “we (the guards) have been sick of your group for over two months now”, meaning that the problem wasn’t with me individually but rather the guards were trying to make a collective punishment on the entire group.

A normal search of a cell would take about 45 minutes, however they searched the cell for about 3 hours and confiscated only an undocumented hotplate for cooking and furniture. No mobile phone was found and the guards went crazy that not a single mobile could be found, this is as they are all acutely aware of the problem of corruption within the prison administration and therefore presume that every prisoner has a mobile. The same guard who had provoked the two incidents then came to me in the temporary holding cell and tried to intimidate me to sign as a witness for the search in 17th cell that had been carried out without me, I flatly refused and explained that I would not be
a witness for something that I didn’t in fact witness.

With nothing illegal found in the cell, the guards then tried threatening other
prisoners to testify against me, but out of about 100 prisoners not a single one would lie, all of them stuck to the truth as they saw and heard it. I was kept in the
temporary holding cell (which can be said to be less then comfortable) all day, but allowed visits from the Bulgarian Helsinki Committee, a lawyer and the Honorary Consul of Australia. At 4.30pm I was returned without explanation to 10th group, but needless to say all my personal belongings had been thrown around, destroyed or confiscated. The prison administration wanted to put me in isolation, but could not find legal grounds to do this especially as my lawyer was present. So they took the administrative decision to move me from my old cell to a different cell, in a petty attempt to increase my discomfort, however for those of you who know me personally, you know I love camping!

An ‘investigation’ was carried out and concluded by the prison administration but has yet to be revealed, the Bulgarian Helsinki Committee have conducted their own investigation as well as the Ombudsman’s office of Bulgaria. The matter has been referred to the regional prosecutors office, but experience tells us not to expect anything when it comes to the Bulgarian state investigating itself. The instigating guard was not moved from the block and on Monday the 21st of October he started threatening prisoners to not testify against him; however on the 25th of October he was moved to another place within the prison to separate him from his victims.

This is another case of unacceptable violence against the human rights of prisoners in Bulgaria, the commanding officers should be sanctioned, failing this the Association asks for the resignation of the Director Peter Krestev, so that law might prevail within Bulgarian prisons!