From Warrior Publications: On October 17th, 2013 the KKKanadian Royal Canadian Mounted Police (RCMP) moved in on the anti-shale gas protest near Elsipogtog First Nation after some individuals at the site issued death threats, brandished weapons and forcibly confined security guards in a compound holding vehicles belonging to a Houston-based energy company, according to the force’s superintendent of national Aboriginal policing. 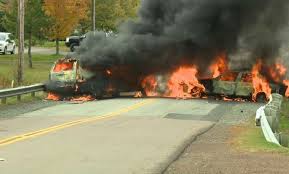 The RCMP has faced criticism from First Nations leaders across the country over last Thursday’s raid last which led to 40 arrests, the seizure of three rifles and improvised explosive devices and intense clashes between Elsipogtog residents and RCMP officers. Read the full article here.

Video from a Mi’kmaq warrior here. 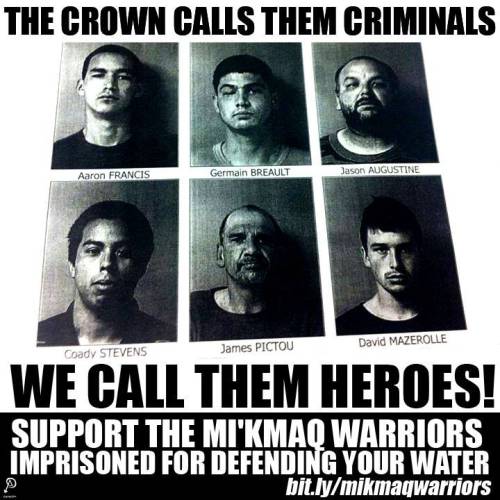 Update: If you want to write to the jailed Warriors, their addresses are at the bottom of this post.

Donate to the Warrior’s Defense Fund

Mi’kmaq Warriors who were jailed after the brutal raid by RCMP at the #MikmaqBlockade near #Elsipogtog on Thurs Oct 17th, 2013 faced continued abuse within the prison system. 4 warriors remain in jail, 2 have been granted bail. Upon detention, Mi’kmaq Warriors endured physical assault on behalf of Correctional staff. Call the Ombudsman, file a complaint and demand:

Tell the Ombudsman that Land Defenders must be treated with respect and basic human dignity.

The Prison Injustice System is part of the larger project of colonization, whereas Indigenous peoples are disproportionately incarcerated, and Federally over-represented in the prison system. This is part of a systemic issue of mistreatment of Indigenous peoples, and a direct assault on Indigenous Land Defenders asserting their Inherent and Treaty Rights & Title on unceded traditional territories. Mi’kmaq Warriors were some of 40 people arrested at the Oct 17th RCMP raid of an anti-shale gas blockade wherein local Indigenous and non-Native allies seized SWN – a Houston-based company’s – equipment. The blockade lasted 19 days – costing SWN over $1 million – effectively protecting the lands, waters and future generations from the dangers of hydraulic fracturing, or fracking. There has been no consultation with or Free Prior Informed Consent from the local Indigenous communities who hold title to the land by inherent and treaty rights.