[Update 1/12 – MP’s to vote at Parliament on the fee increases & other relevant changes on Thursday 9 December. Mass protest London & locally 9 December. Day of action against fees and cuts on 8 December. Further Bristol protests 4 and 5 December.]

Several thousand students, schoolkids and supporters marched, ran and charged around Bristol for about 5 or 6 hours today in the latest protests against rises in university fees and cuts to benefits such as EMA.

Police lines and attempts to kettle protesters were breached multiple times as the up-for-it crowd led cops a merry dance around town. At one point in mid-afternoon as the crowd surged once more into Broadmead and Carboot Circus, it seemed as if the cops just gave up for a while. However the crowd was more exhuberant and joyous, than destructive, and did not attack these temples of consumerism. Later as the numbers dwindled up near Bristol Uni, the cops tried it on and made a number of arrests, resulting in a solidarity demo outside Trinity police station. Good reports on Bristol Indymedia, keep checking their newswire. The UWE occupation continues, Bristol UNI students have an AGM coming up, and LibDem MP and pledge-breaker Stephen Williams faces a protest on Friday. 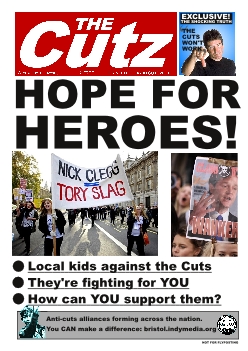 Bristol's excellent 'The Cutz' showing kids out on 24 November

Meanwhile NUS careerist and Labour party wannabe Aaron Porter has bowed to pressure and agreed that NUS will back occupations, as well as calling for a national day of action when the UK parliament votes on the Browne report, possibly on 14 December? Keep your eyes on those NUS types and dont let them stab you in the back again. For national reports and upcoming events check out NCAFC.

With more protests in the pipeline, make sure you know your rights and are properly prepared for protesting. We provided here practical & legal info and there’s more at the activists legal project.