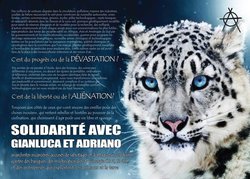 The anarchist comrades Gianluca Iacovacci and Adriano Antonacci were
sentenced today by the judge Simonetta D’Alessandro to 6 years (Gianluca)
and 3 years and 8 months (Adriano) of jail for several sabotages and incendiary attacks against ENIL, ENEL Energy companies, a fur shop, banks and the working site of a refuse-dump in the area surrounding Rome, between 2010 and 2013.

The judge confirmed the charge of 270bis (subversive association) with the aim of international terrorism. Gianluca claimed some time ago the responsibility for some of the actions they were accused of, the ones signed by FAI.

During the trial he refused to defend himself and resigned the lawyer, both of them refused to participate in the trial by video-conference.

Incendiary solidarity with our two comrades!!!