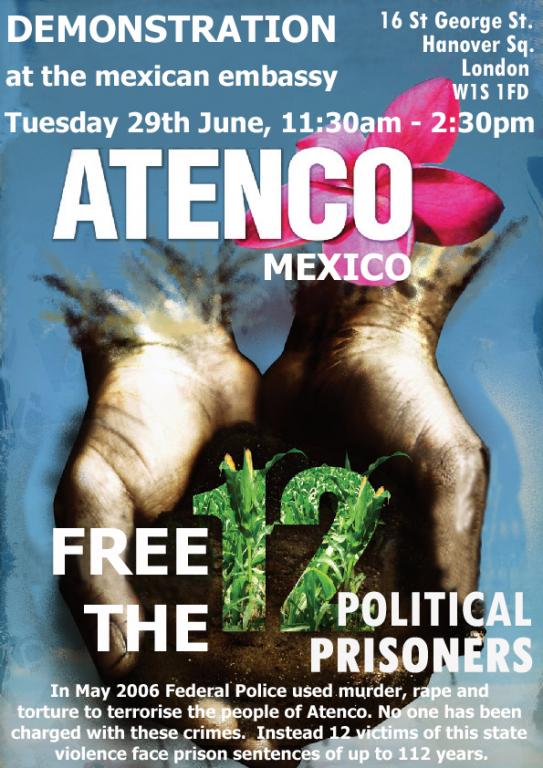 Twelve activists from the Peoples Front for the Defence of the Land from San Salvador Atenco near Mexico City are serving jail sentences of up to 112 years.  Now their case is set to be reconsidered by the Supreme Court in Mexico and people in Britain are to gather at the Mexican Embassy in London on 29th June to demand their release.

“These people have been imprisoned for the crime of standing up for the poor peasant farmers of the area,” said Esther McDonald of the UK Zapatista Solidarity Network, who have organised the protest, part of a world-wide day of action.  “It was the representatives of the state who committed violent atrocities at Atenco: Amnesty International has detailed shocking systematic sexual assaults and rapes by the police on 26 women during and after the police assault on Atenco in May 2006.”

The events of 3rd /4th May 2006 were sparked off when police tried to arrest peasant farmers selling flowers in the street.  When locals went to the flower-sellers aid and drove off the police, a massive state force gathered and then invaded Atenco. Police killed two youths, Alexis Benhumea and Francisco Javier Cortes, and arrested over 200 people.  Dozens of homes were invaded without warrants, and hundreds of people were tear-gassed and beaten.  Police subjected 26 women to serious sexual assaults, including rape, in attacks described by Amnesty International as “torture”. But the roots of the conflict between the people of the area and the government go back further.  In 2002 a direct action campaign against the construction of a new airport for Mexico City on local peasants’ land culminated in an insurrection. The government were forced to drop their plans.

Many commentators believe the events of May 2006 were planned by the government to exact revenge, and to attempt to smash the strong organisation of the local peasants. What’s more the Peoples Front for the Defence of the Land were at that time hosting Subcomandante Marcos of the Zapatistas on his tour of Mexico to launch “The Other Campaign”. “The government is terrified that the Zapatistas’ struggle for self-government and people’s control will spread throughout the country,” says Esther McDonald of the UK Zapatista Solidarity Network. The Mexican Supreme Court of Justice of the Nation is expected to review the Atenco cases in the near future, probably in late June.

Passed over by the UK Zapatista Solidarity Network, a group that gives solidarity to the indigenous Zapatista movement in the state of Chiapas,  southern Mexico, and to other movements for freedom and autonomy in Mexico.

More info: Campaign for Freedom and Liberty for the Atenco prisoners (in Spanish).