You don’t hear much about Greece in the news these days, just the odd snippet buried away on the inside pages of the ‘serious’ newspapers, or perhaps on their on-line business/economic sections. If you check those then you may be aware that the Greek economy is in such a mess they may be kicked out of the eurozone, which is one reason the euro has dropped so much in value these last few weeks.

You may be aware of a degree of unrest amongst the workers, faced by severe austerity measures proposed by the ‘socialist’ government. You probably wont have heard about the massive mobilisations by farmers that have brought much of the country to a halt and closed its borders to the north. You almost certainly wont have heard about the trial of the killer cops that was due to start this week. Thats the cops who shot to death the 15 year old kid, that started the insurrection on 6 December 2008, that led to 17 days rioting across much of the country, and led to the ongoing low-level insurrection happening ever since. 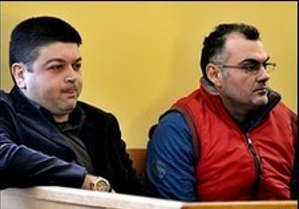 The 2 killer cops facing trial are Epaminondas Korkoneas, for voluntary homicide, and Vassilios Saraliotis for complicty to voluntary homicide. Korkoneas is no friendly neighbourhood cop, a former specialist soldier he went on to work for ‘security’ within the Golden Dawn fascist group in Greece. They claim they meant to fire in the air after being confronted by youths in Athens, but the bullet took a ricochet. And made an outright kill. What a defence!

Logically, they should be tried in court in Athens, but citing ‘security’ their friends in government moved the trial to Amfissa, a small town 200km north of Athens. The trial was due to start in mid-December 2009, but was delayed by the government citing ‘security’ due to its proximity to the anniversary of the killing. The trial was due to start on 20 January, but was immediately adjourned until today (23 January) because, wait for it, their chief defence lawyer was busy with another case elsewhere!

The mother of the murdered 15-year-old Alexandros Grigoropoulos, has fought long and hard to have the trial moved back to Athens, but her arguements have been chucked out by the courts. Presently her own mother is very ill in hospital, so she may well refuse to make the journey to court each day. She recently issued a statement condemning the behaviour of the authorities, and the actual investigation for ignoring some facts completely, causing a lot of embarrassment but no changes. The state always protects its own.

In the run up to the trial, anarchists and others visited Amfissa for a spot of counter-information, and found a town under police siege. despite this they reported a fair welcome and hearing. The text of the leaflet they distributed is worth reading. Also in the run up to the trial, anarchist detainees at Amfissa prison were moved with no notice. Awaiting trial for alleged bank robbery, the elderly Alfredo Bonnano, and Christos Stratigopoulos, were moved to Korydallos prison near Athens. Also moved was long term anarchist prisoner Ilias Nikolaou, transferred to Diavata prison near Thessaloniki. This may have been done because the 2 killer cops are almost certainly inside the Amfissa prison too now, and the state feared more trouble in the prisons. Or maybe they feared protesters would overwhelm the police in 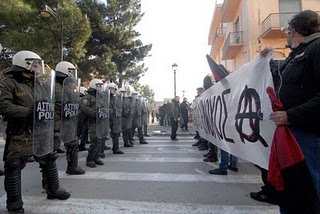 Amfissa and help the prisoners escape? Either way, protesters attempting to get to Amfissa on 20 January, faced severe harassment getting there, and a massive riot police presence when they got there. Of course they did get there, and held 2 noisy angry protests skirmishing with the cops (photos). Elsewhere in the prison regime, over 300 prisoners at Grevena prison have been on hungerstrike since 11 January protesting their inhumane conditions. Expect more of this.

Watch this space! Or rather consider what you can learn from events in Greece, and then DIY.