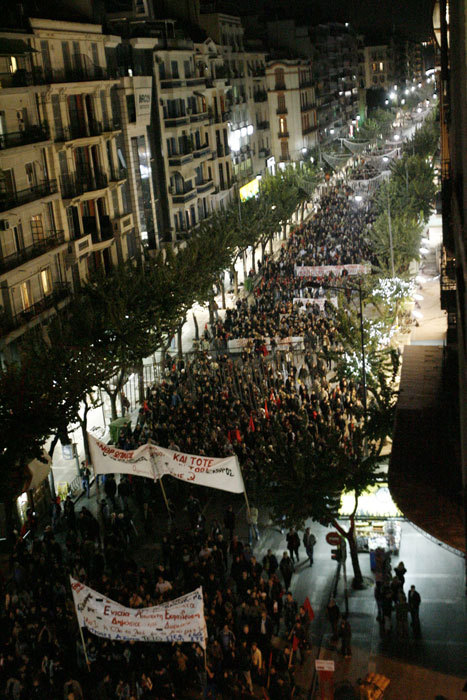 [Update 18/11/09: Yesterday 17 November saw mass protests on the anniversary of the 1973 student uprising against the Colonels’ Junta in Greece. Despite heavey repressive policing people marched in Athens, Salonika and elsewhere. In Athens and Salonika protesters fought back against riot police provocation and heavy teargassing, building barricades and targetting corporate businesses. Over 270 were arrested in Athens, and another 13 elsewhere. However it seems that only 8 or 9 have actually been charged, with the rest released. Report here, update here.]

Last week saw at least 3000 of Greece’s 12000 or so prisoners take action to demand reforms from the authorities. The action included the refusal of food from prison kitchens, and may have been a first step to an all out hungerstrike like the one in November 2008 (although food was refused from the kitchens last week, many prisoners have their own supplies provided by family & supporters, as prison food is in any case insufficient).

However, the Greek state, fearful of a repeat of last years prison revolt, and mindful of the hot month about to commence in Greece, acted unusually quickly to make minor concessions and promise further talks – report here (and scroll down to comments). As a result, the prisoners’ action has it appears been suspended for now.

Prisoners in Greece have been struggling almost constantly for reforms since April 2007. The Greek prison system is an intensely inhumane oppressive regime that provides little or no healthcare, justice nor rights. It remains massively overcrowded, for example Korydallos prison in Athens is designed to hold 600+ prisoners but has over 2000. Prisoners deemed political, or who are openly political, naturally attract some of the worst repression.

The 4 day prison revolt at Malandrino prison in April 2007, started after an anarchist prisoner was beaten up by guards. That prisoner was Giannis (or Yiannis) Dimitrakis, who of course remains in prison. You can read a recent interview with him here.

On Sunday 22 November Bristol ABC will be hosting the weekly cafe at Kebele social centre, and showing 2 films. The first film up is a 35 minute diy film about that April 2007 prison revolt. Come along and find out more. Food from 6pm, films from 7.30pm (the second film will be a recent version of the classic 1973 BBC documentary about The Angry Brigade).

Greece remains very tense, and is about to enter a month of high activity, and tension. Tomorrow, 17 November, sees the annual protests commemorating the 1973 student uprising against the Greek Colonels’ Junta, which resulted in at least 14 students being murdered. The Junta fell the following year. The 6 December marks the first anniversary of the murder by cops of the teenager Alexis in Athens, that led to the uprising across Greece, and which briefly filtered through to the mainstream media in the UK. That uprising has not ended, struggles continue on many fronts – by the labour movement, students and school children, migrant workers & refugees, the defendants and prisoners, and of course the anarchist and anti-authoritarian movements and centres. The 6 December anniversary is due to be followed, on around the 15 December, by the trial of the cop(s) who shot Alexis in cold blood.

The best places to follow news from Greece, if you dont speak Greek, are here:
Libcom newswire; Occupied London blog; Athens Indymedia; 325 resource. Keep your eyes peeled for calls for solidarity from Greece, not that you need anyone’s permission of course…