Self-defence is no offence

Jock is a young Australian man, with British connections, who a few years ago visited Bristol for a while. He hung out mainly in East Bristol around the alternative scene, went to The Plough pub etc.

After nearly 2 years on remand in Sofia Central prison, Bulgaria, he was on 2 December 2009 found guilty of of premeditated murder and attempted murder with antisocial (hooligan) intent. He was sentenced to 20 years imprisonment, and a 450,000 leva (375,000 Aussie dollars) fine. 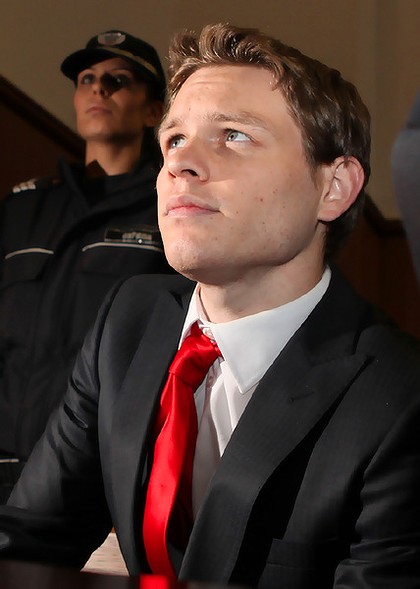 The bare facts of the case are these: in late December 2007 Jock was on a night out in Sofia. Quite late in the evening he saw a group of at least 15 men attacking 2 Roma (gypsy) people. It is generally accepted this group were football hooligans, with neo-nazi tendencies, and this was a racist attack (the Roma are heavily persecuted in Bulgaria). Jock intervened, and the Roma escaped. The gang turned on Jock and attacked him with concrete blocks. He defended himself with a knife, killing one attacker and injuring another. Unfortunately for him, the dead man came from a well-known Bulgarian family of high status.

2 years on he has been found guilty, after a trial littered with dubious activities – missing video footage, changed witness statements, failure to interview key witnesses, conspiracy by the gang and almost certainly the cops, other evidence refused in court, abuse of procedures and Jock’s rights. There seems little doubt to us that this became both a political trial and a miscarriage of justice. We have contacted his campaign to see what we can do to help.

View his campaign website FreeJock.net to read about the case, the true facts, and his defence. You will also find his prison address there.

Did you know Jock in Bristol? If you did please support him – details on his campaign website.

This is Jock’s post-trial statement on 3/12/09:
“The decision made by the Sofia City Court on Wednesday 2 December 2009 was in complete contradiction to all available evidence put before the court.

In the face of all neutral witness statements, testimony from the police, forensic reports, psychological reports, blood alcohol results and the CCTV video footage that confirm my account of events, word for word, in concurrence with my testimony, the court has still declared me guilty of attacking a gang of men with no provocation and/or reason and of the premeditated murder of one man and the attempted murder of another.

This is not only an abomination of justice and my right for a fair and objective trial, but also a green light for football hooligans to continue their attacks on other law abiding members of society, especially racial minorities who are a prime target for such groups within Bulgaria, the EU and the world.

With the blatant bias in every facet of the justice system, from my arrest and investigation to the decision of Sofia city court, I reject the verdict of wilful murder for anti-social motives and I plead with all members of society from Bulgaria to Australia and all countries between, to help in stopping these 2 years of unjust imprisonment from becoming a 20 year unjust imprisonment.”