Today 20 December marks 11 months on remand for EDO Decommissioner Elijah (James) Smith. That’s 11 months locked away in a shitty little cell, deprived of all his freedom, and without any opportunity to argue his case in court. 11 months in prison without actually being found guilty of anything.

Elijah and the other 5 Bristol anti-militarists face a major trial in May 2010. Whilst the other five face stringent bail conditions, they are at least not locked up in a cell. Elijah however faces another 5 months locked away before getting into court. Compare and contrast this treatment of a man accused only of property damage, with the treatment of the cop who assaulted Ian Tomlinson, moments before he died, at the G20 protests in London on 1 April 2009 – who remains uncharged, at liberty and on full pay. British justice, what a farce. 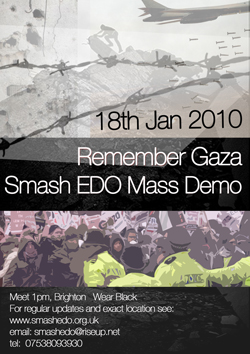 Elijah, the other Decommissioners would welcome your support and solidarity, both in their case and in their campaign against EDO ITT and other profiteers from wars. To support the Decommissioners check their website, keep an eye on Bristol Indymedia for upcoming events, and also see the wider Smash Edo campaign. To support the anti-militarist campaign just find an arms delaer/manufacturer, anywhere, and DIY. There is a fundraising cafe & film night for the Decommissioners support campaign tonight, 20 December, from 6pm at Kebele social centre.