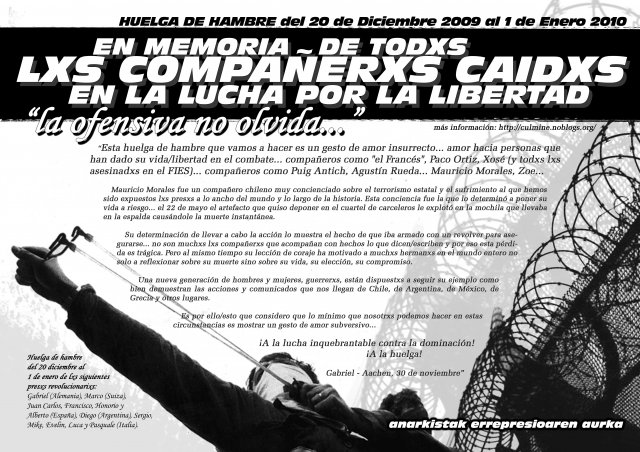 Following Gabriel Pombo Da Silva’s call for an international hunger strike 13 anarchist prisoners from all over the world have so far joined in. The strike started on December 20th and will carry on till January 1st.

The initiative comes spontaneously from the prisoners themselves, in particular to remember the Chilean anarchist Mauricio Morales who died in May this year while he was trying to place a bomb outside a local penitentiary police’s school.

In his initial communiqué Gabriel writes: “To me hunger strike is a strategic tool of struggle…in the situation we are – kidnapped by the State and the Capital – we only have this form of struggle seen as we all are spread in different jails and countries.”

Notes: Gabriel Pombo Da Silva is a Spanish anarchist who escaped from the notorious FIES prison system in Spain, but was subsequently recaptured in Germany. You can read some background info about him, and some of his writings, here (small pdf). Here is a callout for solidarity with him in 2007. He has now spent 24 of his 40 years in prison. You can write to him here: Gabriel Pombo da Silva, JVA Aachen, Krefelder Str. 251, 52070 Aachen, Germany

For further information on the hungerstrike (not in English) have a look here or here.