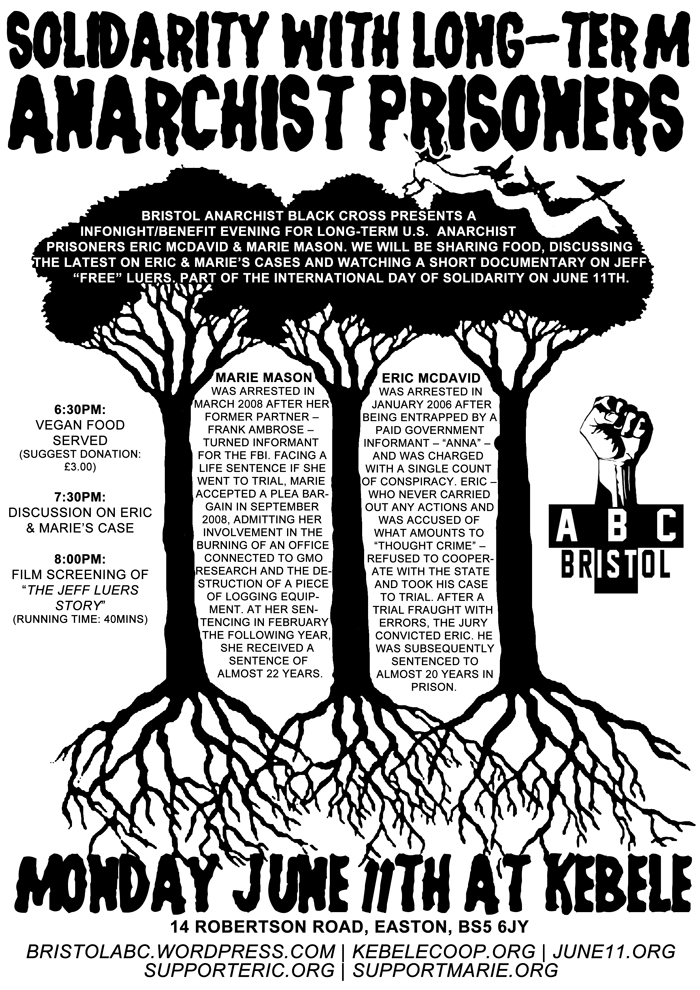 As part of the international day of solidarity on June 11th:
Bristol ABC presents an infonight/benefit evening  for long-term U.S. anarchist prisoners Eric McDavid & Marie Mason. We will be sharing food, discussing the latest on Eric & Marie’s case and watching a short documentary on Jeff “Free” Luers.

Marie Mason is a long-time environmental and social justice activist and loving mother of two. In March 2008, she was arrested on charges related to Earth Liberation Front actions that occurred in Michigan in 1999 and 2000; no one was injured in the actions. On February 5, 2009, Marie received an outrageous 262 month sentence (a little under 22 years). The sentence was higher than even that asked for by federal prosecutors. Marie’s sentence is the longest given to any “Green Scare” defendant to date.

In September 2007, Eric McDavid was found guilty of conspiracy to sabotage federal facilities in the name of the environment. The government’s case was based on the word of an FBI informant who was paid over $75,000 to fabricate a crime. Both of Eric’s co-defendants testified against Eric in return for a lesser charge. On May 8, 2008, Eric was sentenced to an outrageous 19 years and 7 months in prison for a crime that was never committed. Eric is appealing his conviction

Or alternatively, why not write a letter of support to them:

June 11th began as an international day of solidarity with long-term anarchist prisoner Jeff “Free” Luers in 2004. At the time, Jeff was serving 22+ years. Infuriated by the environmental devastation he saw occurring on a global scale, Jeff torched three SUVs at a car dealership in Eugene, OR. The sentence imposed on him was meant to send a clear message to others who were angered by capitalism’s continued war on the Earth’s ecosystems – and to those who were willing to take action to put a stop to it. Jeff is, after all, not alone in his concerns about climate change, fossil fuels, pollution and genetically modified organisms.

After years of struggle, Jeff and his legal team won a reduction in his sentence and he was released from prison in December 2009. But in the years intervening Jeff’s arrest and release, the FBI had carried out a series of indictments and arrests in an attempt to devastate the radical environmental and anarchist communities. Two of the people caught up in this maelstrom of repression were Eric McDavid and Marie Mason.

Eric McDavid was arrested in January 2006 after being entrapped by a paid government informant – “Anna” – and was charged with a single count of conspiracy. Eric – who never carried out any actions and was accused of what amounts to “thought crime” – refused to cooperate with the state and took his case to trial. After a trial fraught with errors, the jury convicted Eric. He was subsequently sentenced to almost 20 years in prison.

Marie Mason was arrested in March 2008 after her former partner – Frank Ambrose – turned informant for the FBI. Facing a life sentence if she went to trial, Marie accepted a plea bargain in September 2008, admitting her involvement in the burning of an office connected to GMO research and the destruction of a piece of logging equipment. At her sentencing in February the following year, she received a sentence of almost 22 years.

Marie Mason and Eric McDavid share the unfortunate distinction of having the longest standing sentences of any environmental prisoners in the United States. Please join us in an international day of solidarity with Marie Mason, Eric McDavid, and other long-term anarchist prisoners on every June 11th. This is a time to remember our friends who are in prison – who are continuing their struggles on the inside. This is a time to continue and strengthen the very work for which Eric and Marie are now serving so much time – to struggle against capitalism, ecological devastation, and the ever more diffuse forms of control in this prison society.