The ConDem Coalition’s attack on legal aid is just one of their many class-based attacks at present. As with nearly all of their so-called austerity measures, in practice it is once again lower or un-paid people who are being asked to foot the bill to prop up the financial system and keep the rich ever richer.

Whilst the proposed cuts of around £350 million focus on ‘civil’ legal aid, they will directly affect poorer people most and expose them to greater injustice, poverty, and quite possibly prison. We can also expect a further squeeze on criminal legal aid. All cuts to legal aid effectively reduce access to ‘legal justice’ from those least able to afford it, and in most need of it. The majority of prisoners come from poor and/or vulnerable backgrounds for example, and rely on legal aid not just for their original cases but also to defend their rights whilst in prison, and around such issues as parole hearings and any alleged offences committed whilst locked up. 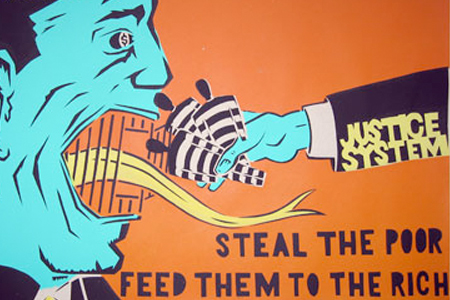 We have very little faith in British justice and the legal system. We see it as a system designed to protect the property, wealth and power of the richest and most powerful individuals & corporations, and of course the state in its decisions that affect us. It has been, and remains, the case that justice is weighted heavily in favour of those who can pay the most for it, and of course those who control it. However given we are all forced to endure the rule of law, any system such as legal aid that brings a little equality to the legal process, and helps people stay out of poverty and prison, is worth defending!

Bristol protest – Save Legal Aid – Monday 7 February, 12 to 2pm, at Queens Square, Bristol BS1, outside the offices of the legal services commission. Come along to this if you can. There is good local info about the cuts and what you can do at the Advice West website, whilst the Justice For All campaign is a national coalition of relevant groups fighting the cuts. There are also a number of articles in Inside Time looking at how legal aid cuts affect prisoners.

This blog post from the Joint Council for Welfare of Immigrants is worth a read: “On 30 July 1949, legal aid was introduced in the UK. One of the best-funded systems for legal representation on the planet, it is now facing its nemesis in the shape of the Coalition Government. A valiant effort at closing the ‘justice gap’, legal aid turned the justice system in the UK from the preserve of the rich to something which, with research, fortune and the right contacts, the poor could also access. 62 years of a more equal playing field, it seems, is far enough, as the Government prepares to roll back the clock and limit access to courts, tribunals and ultimately the rule of law.

Kenneth Clarke, Minister for Justice is overseeing one of the biggest changes to the legal system in memory, the full frontal assault on legal aid. Having the rule of law is universally accepted as a good thing, denying people access to legal representation through a support system for the poor compromises that system, creating a two tier system; those with recourse to the courts and those who do not.” Read full article here.