(Update: Pictures and report of the memorial event are here.)

The Ian Tomlinson Family Campaign have called for a memorial gathering on the 1st anniversary of his death, at 11am on Thursday 1 April. People are asked to gather at the spot where he died in the City of London, just moments after he was violently assaulted from behind by a cop in riot gear. Please meet at Cornhill, by Threadneedle St, London EC3V (Bank tube), at 10.45am, so a minutes silence can be observed at 11am. One year on from his death, no cop has been held responsible. 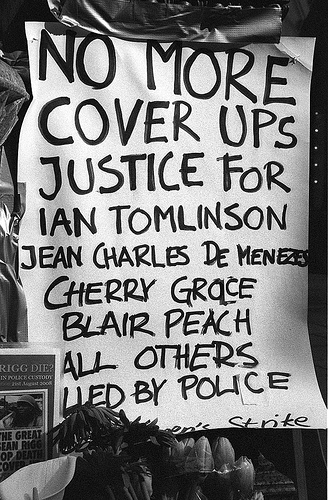 Tomlinson, a 47 year old newspaper vendor, was on his way home on 1 April 2009, and had to pass through the area where protests were ongoing against the G20 meeting discussing the worldwide economic crisis. Video footage, available on the Campaign website, clearly shows Tomlinson being hit from behind by a riot cop’s baton, following which he was violently pushed to the ground by the same cop. After struggling to his feet, Tomlinson collapsed and died a few metres away.

Initial police comments and dogy post-mortems attempted to show his death as natural, or blamed protesters, but video footage came to light clearly showing the cops attack on him (timeline). There have subsequently been any number of inquiries. An investigation by the IPCC into the assault saw a file passed to the Crown Prosecution Service last August. But while a cop is believed to be suspended, nobody has been named and no cop(s) held responsible. Nothing new there then. (See Inquest stats).