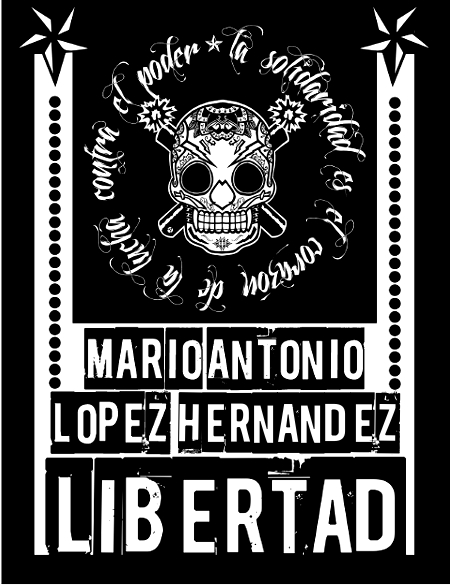 In the early hours of June 27th, there was an explosion at the corner of Vicente Guerrero and Londres streets in the Del Carmen neighbourhood of Coyoacán, in Mexico City. Comrade Mario Antonio López Hernández was found there with several burns across his body. He was put in an ambulance and transported under police custody to Rubén Leñero hospital, where his leg and arm were operated on.

At no point was his family allowed to see him, let alone was he able to consult with a lawyer that he trusted to make a statement regarding the accusations that he was facing. On the contrary, members of the Mexican Federal District’s judicial police hounded him with questions, pressuring him to respond—even though the comrade was not physically able to testify, because he was still anaesthetized from surgery—and to accept his participation in other actions, in particular an explosion which had occurred hours before at an ATM at the building of the Federal Electricity Commission (CFE).

It wasn’t until a day later, after pressure from several comrades, that he was able to communicate with his lawyer and family. His family’s house was searched, and nothing relating to the accusations was discovered. Since the morning that Mario was found injured, the mass media published articles in which he is portrayed as a dangerous terrorist.

We have information that the police are trying to link more people to the facts, Felicity Ryder in particular, whose name has appeared in various mass media outlets as Mario’s supposed accomplice, to the point of even declaring that she’s been detained; this, however, has not been confirmed by the Attorney General of Mexico (PGR).

We condemn these irregularities, not because we believe in laws and legality, which only serve to sustain this predatory system, but because we think it’s important not to shut up before the attempt of the Mexican Federal District’s government and judicial police to stage a media case against Mario in particular and the anarchist movement in general.

We are certain that the Mexican Federal District’s government intends to make a scapegoat out of Mario, by setting up a case that attempts to link him to other actions and changing the charges, the last one being “Attack on Public Peace”, and furthermore that they’re beginning a hunt of anarchists. The Attorney General of Mexico has demonstrated that he’s incapable of restraining the offensive of anarchist direct action groups and is, thus, trying to take advantage of a compañero’s accident in order to make an example of him and strike fear into anarchist groups. We also know that the police have a list of names of comrades and organizations that they are now investigating.

We the members of different organizations and collectives in the anarchist movement declare:

– Our total solidarity with our compañero Mario through these difficult times. We embrace him and await his prompt and thorough recovery.

– Solidarity among anarchists is more than just a written word, as we will take a series of actions to disseminate information about the comrade’s situation, as well as to demand his immediate liberation.

– We ask to see and hear Felicity Ryder. In an article from June 29th in the daily newspaper Excelsior, it is mentioned that she has been detained, but this has been neither denied, nor confirmed by the Attorney General of Mexico.

– We reject and denounce the crude attempt by the Mexican Federal District’s government to turn our compañero into a scapegoat while he is incapacitated.

– We call on all independent, autonomous and anti-capitalist organizations to be vigilant about the government’s attempts to provoke an anti-anarchist witch-hunt. We are sure that this new “leftist” government will continue the policy of prosecution and judicialization of any political expression that doesn’t adhere to their plans.

– The social inequality, which sustains this system of domination and exploitation, is much more violent than any form of protest, and attacks the innate right to a dignified life, hindering the freedom of individuals, preying on nature, subjecting the peoples, stripping them and casting them into ever more numerous penitentiaries of this prison-society; this is why we will continue to organize ourselves and build a new world, founded on freedom, mutual aid, solidarity and free accord.

For Mario’s freedom!
For anarchy!

Note: It was reported in the bourgeois Press that another person may have been arrested, namely Felicity Ann Ryder (Australian citizen), but this has so far neither been confirmed by comrades or relatives, nor declared officially by the Mexican or Australian authorities. In addition, it became known that the house of Mario’s mother was raided and searched on June 29th. The “Lawyers Group in Solidarity with Anarchist Prisoners”, in their Press release of June 29th, denounced the kidnapping by the Mexico City’s authorities of the Australian citizen Felicity Ann Ryder, based—as it seems—solely on information about her arrest that were spread by diverse mainstream media, while they emphasized it had not yet been made public where she was being held, nor on what charges. See also this update (retrieved from the Press, though). We ask anyone to contribute confirmed information on Felicity’s situation (and not mere media speculations), if possible.

You may read a communiqué by Mario López “the Gut” himself on Slackbastard.