Yesterday 17 February saw a small low key protest in Bristol, organised in solidarity with the anti-olympic protests in and around Vancouver in the Canadian state of British Columbia. The protest was called after Bristol ABC hosted a cafe and info night at Kebele social centre on Sunday 14 February, which focused on the attacks on the rights of indigenous (native) peoples in Canada, and the ongoing theft of their lands – which has been going on for over 500 years.

The promotion and organisation of the winter olympics in Vancouver has stimulated growing resistance from a broad coalition of communities and campaign groups, that has received an increasingly sympathetic hearing amongst the wider population as the massive costs of the olympics has become clearer, and the information known about the environmental impact has become more detailed – for example in excess of 100,000 trees have now been felled to accommodate the olympics. The Canadian government faces growing anger in relation to the olympics, and the economic mess Canada is currently in. No surprise then that at the end of December 2009, the Candian PM suspended Parliament until early March 2010, in a move that also put an embarassing inquiry into Canada’s complicity with the treatment of detainees in Afghanistan onto the backburner. The olympics and democracy? Yeah right! 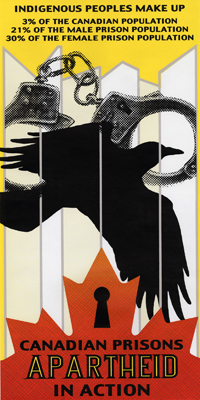 The info night showed a number of films, including some from the No2010 anti-winter olympics campaign. The Canadian speaker also explained some of the history of the theft of the indigenous peoples’ land, and some recent examples of resistance to this – more info here and here. She went on to demonstrate the ongoing repression of the indigenous peoples, including their massive over-representation in Canadian prisons and detention centres.

Whilst indigenous people make up between 3 & 4% of Canada’s population, latest figures available (2008) indicate they make up close to 20% of the total prison population, including over 33% of all women prisoners (an increase of over 130% in the last ten years). In recognition of the racism and discrimination suffered by indigenous prisoners, the Canadian Correctional Services (prison authorities) compiled a ‘Strategic Plan for Aboriginal Corrections’ in 2006. But guess what? In a report published in November 2009, the Office of the Correctional Investigator (OCI – a sort of prisons inspectorate) undertook a comprehensive review of CSC’s progress in meeting its strategic plans and obligations, and its boss Howard Sapers, the Correctional Investigator of Canada, had this to say: “We see the outcomes of aboriginal offenders actually getting worse, and not better.” (Media analysis here).

So there we have it, an olympic dream based on the theft and exploitation of indigenous peoples lands. Based on a capitalist system that forces these same people into the worst housing and schools. Then when they react badly to their oppression and poverty, it locks up more of them and treats them far worse than other prisoners. Still looking forwards to the London olympics in 2012…