(Update: From Russia With Love – the fundraiser enabled some £300 to be sent to comrades in Russia, who have sent a big ‘thank you’ in return. Details at Bristol Antifa).

Recent years have seen a rise in right-wing nationalism in Russia. Dire economic problems alongside a lessening of Russian influence on world affairs has led many of its politicians and industrialists to foster nationalism as a way of diverting the anger of workers and land workers down a path that will not threaten their power. Unsurprisingly there has been a growth of racist and fascist groups, including a growing and violent skinhead/hooligan culture, that take their anger out on vulnerable groups in society. 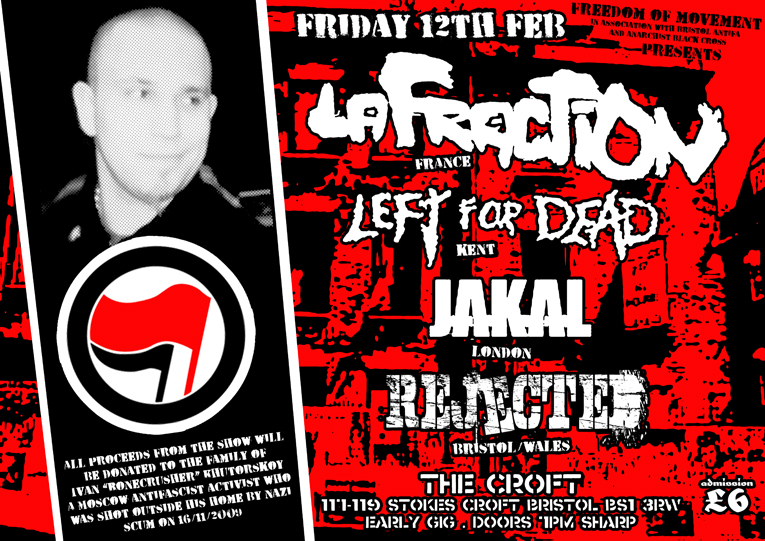 Fundraiser - note Jesus Bruiser play instead of The Rejected

So we see growing numbers of attacks and murders on foreign workers, visitors and migrants. There are also attacks by state agencies (or by groups backed by the state) on those journalists and politicals who try to get to the truth of matters, to expose the lies and corruption of politicians and big business.

Naturally, where there is oppression, there is resistance. But the task for the anarchists, radicals, anti-fascists and others, who stand up to racism, nationalism and the political and corporate elite, is a difficult and dangerous one. The 19 January 2010 saw a mobilisation across Russia, and internationally, against fascism and in memory of victims of the fascists and the state (report here or here). Whilst this was seen as a success, most of the protests across Russia were attacked by either fascists or the state, or both, and comrades were arrested. Indeed, there are frequent arrests and imprisonment, casualties and deaths.

One such death occurred in November 2009, and concerned the murder of the committed anti-fascist Ivan Khutorskoy, who was shot and killed just metres from his family’s own home. It was not the first physical attack on him, but this one was fatal. He leaves behind a mother and sister. In an act of solidarity, and to help his family pay for funeral and other costs, Bristol Antifa and Bristol ABC have organised a benefit on 12 February at The Croft (see flyer). Bristol Antifa have also established some contact with anti-fascists in Russia, whilst here at ABC we have managed to make contact with someone from Moscow ABC. If you are unable to make it to the gig, but are able to send a donation, see here to donate via Bristol Antifa, or here to donate to support Moscow ABC’s work.