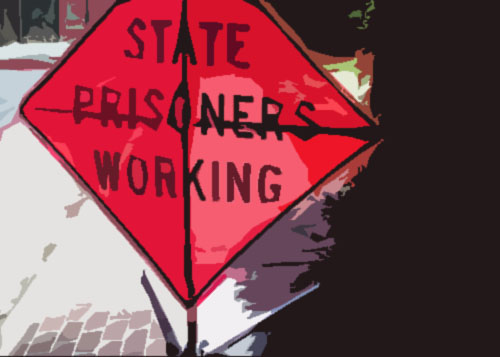 Right-wing Tory Justice Minister Chris Grayling’s declaration in late April that prisoners would now be made to “earn” basic privileges by “working harder” probably wasn’t just the usual “popularist” promise to stick the boot into one of the most powerless and demoralised social groups. During times of economic austerity and potential social unrest scapegoating marginalised and outcast groups like prisoners, is always useful as a means of deflecting and re-focusing public anger away from the true culprits of the country’s economic ruination, in this case Grayling’s pals in the city of London. Behind the rhetoric and the guise of “getting tough” on prisoners is the actual purpose of the prison
industrial complex: to turn prisons into privatised forced-labour factories.

Prisoners are, it seems, to become like third-world workers, a source of  extremely cheap and compliant labour for multi-national corporations, a practice which of course draws its inspiration from the U.S. Where one of the largest prisoner populations in the world have increasingly replaced outside unionised labour as a source of profit. Under the U.N. Charter of Human  Rights forced labour is of course unlawful, but prisoners don’t seem to count, and during times of economic crisis and a burgeoning prison population there is a cold rational in the capitalist intention to focus its rapacity on those behind bars.

It also harks back to the original purpose of the Victorian-inspired model of what was then a modern prison system: to instil conformity and the work ethic in the rebellious poor. After decades of the control and containment model
prisons are to be returned to their original function as places where the errant poor are taught their true place as producers of profit for the rich.

Of course the tabloids who cheer Grayling’s “get tough” treatment of prisoners and whip-up mob support for him omit to mention or question why prisoners are being forced to do work that its unemployed readers could be invited to do
on a legally-enforced minimum wage? And whilst large corporations and companies constantly “rationalise” their operations by shedding labour and creating unemployment, some of these same companies are using prison cheap labour to top-up profits, all with the willing assistance of Grayling and his rich and powerful colleagues in the Tory government.

Not only is prison slave-labour an absolute negation of the basic human rights of prisoners, which Grayling has now prevented any legal challenge to from  within jails by stopping legal aid for prisoner litigation cases, but also the removal of a means of employment for many of those outside prison who are influenced by the lies and witch-hunting of the tabloids and an increasingly right-wing political establishment.

Grayling should also ponder this: forcing a slave-labour regime as a condition for basic privileges on prisoners serving increasingly longer sentences might just be a catalyst for some extremely expensive prison repairs further down the line.