and still no cops charged over his death

Lots of waffle in the media over the last week about the G20 policing, and various reports and reviews into their misbehaviour have been announced. But a stunning lack of comment or news relating to Ian Tomlinson, the newspaper vendor who died at about 7.25pm on 1 April 2009, just a couple of minutes after being viciously assauled from behind by a member of the Territorial Support Group (TSG – hardcore riot cops). 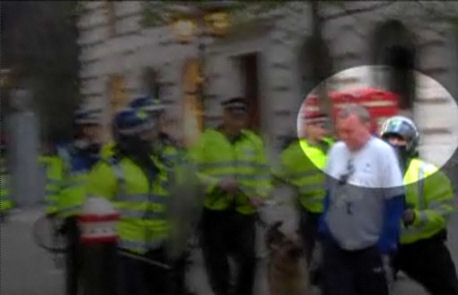 The Tomlinson Family Campaign have called a candlelit vigil for Tuesday 1 December, from 6pm, at Royal Exchange, by Threadneedle St, London EC3V. This will be exactly 8 months since Ian Tomlinson died. The Family had this to say: “Ian died in tragic circumstances, an ‘innocent passerby’ trying to get home, after a police assault at the G20 protests on April 1st 2009. Eight months on our family are preparing for our first Christmas without him and still waiting for justice. We have been grateful for public support this year and would like an opportunity to hold this public memorial gathering to remember Ian, with our friends and supporters around us. We ask that those who attend please wear black as a mark of respect and remember that this is peaceful event.” You can send messages of support – see the Family website.

8 months after his death no cop has been charged. The IPCC report into his death was passed to the CPS in early August, nearly 4 months later no cop has been charged. A cop from the TSG was interviewed under caution ages ago on a possible charge of manslaughter, and has been suspended (on full pay we believe) since mid-April. But 8 months after the assault, he has not been charged, despite numerous witnesses and masses of footage showing him assault Ian Tomlinson.

Imagine if YOU went on a protest, and in front of a load of witnesses and cameras, assaulted a cop from behind, who died within a couple of minutes just a few meters from where you assaulted him. Do you think that 8 months on YOU would still not have been charged, and would not have been held on remand that whole time? Of course you wouldn’t. You would have been tried, jailed, and no doubt the media would be calling for the death sentence for you. So, do the police get away with killing people? The answer…is apparently YES. Do they get away with cover-ups and misleading the public? The answer…is apparently YES.

There is an excellent timeline leading up to Ian Tomlinson’s death on the Campaign’s website, and a briefing (pdf file) from Inquest in June that raises some very disturbing questions about the police cover-up and the subsequent actions of the IPCC. Justice in Britain? Don’t think so!