Never Alone – A zine about supporting prisoners by those on the outside
A publication produced by Bristol ABC and the Empty Cages Collective. Never Alone was created to give a voice to those that support people in prison. Often invisible, unsupported and unrecognised, thousands of people in the UK, and millions internationally, support friends, family, partners and comrades in prison. Click here to download: Never Alone Zine

On the Out – A zine about life after prison
A publication produced by Bristol ABC with articles written by ex-prisoners, looking at life after prison. Including pieces on social control through license conditions, tagging, the emotional affects of repression, how to support someone leaving prison and more. Click here to download: On The Out Zine

Close Supervision Centres in the UK #2 – A Brief Follow Up
After publishing Close Supervision Centres – Torture Units in the UK in April 2012, we received correspondence from people that had been held in CSCs or who had known family or friends who are or have been. A year on and conditions in the CSCs are no better. This is a brief follow up to serve as an accompanying publication to the original, keeping information coming out about what is going on. With letters from inside the CSC system and articles and responses from people that have been struggling against this ugly regime, this follow up publication updates news of the continuing struggle and provides up to date addresses to contact the contributors. Read / Print.

Revolutionary Prisoners in Chile – July 2012
This pamphlet is a list of revolutionary prisoners that remain kidnapped by the $hilean States. This list is a translation that was made in July 2012, it is constantly updated at Liberacion Total  due to the transportation and living circumstances of the prisoners. We recall the situation of some comrades who remain underground, among them Carlos Gutierrez (Charged in the “Security Case”), Diego Rios and Gabriela Curilem. We hope to never have to add them to this list and that they never have to walk in the prison.

Preparing for Prison
Being sent to prison is shit, you are a captive of one of your worst enemies, the state. So be prepared! (The following are guides only, not the ‘law’, and the rules & regulations & procedures can change at any time):
Preparing for Prison  (pdf) – This text has been written by 2 male anti-fascist prisoners in August 2011, shortly after being sentenced to 21 months.
The Partners’ Guide to Prison (pdf) – text written by the partners of some of the anti-fascist prisoners above, this guide is for the partners of male prisoners. (Note that womens’ prisons can be quite different).
HMP – A Survival Guide (website with downloads & info) – written by a former male prisoner, this 28 page pamphlet is useful preparation.

Prison isn’t working – The Prison Works
Excellent 22 page A4 pamphlet by some Brighton comrades. Looks at the history & role of prisons past & present, prison slavery, and prisoner support. Read our more in-depth review here. For more on modern day prison slavery and the ongoing privatisation of prisons check out the Campaign Against Prison Slavery. And for info on the present prison regimes, rules see Inside Info.
The pamphlet is also available to buy at £1 from us or from Kebele Infoshop. 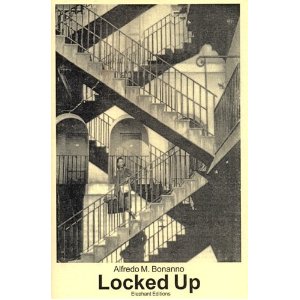 Locked up by Alfredo M. Bonanno
From the author of Armed Joy (for which he was imprisoned by the Italian state for 18th months) brings you writings on prisons and their destruction. Thanks to 325 collective and quiver distro. Click here to download imposed version.

No comment: the defendants guide to arrest
This little booklet is essential reading for anyone at risk of arrest, which means anyone involved in protests. You can download a copy of “No Comment” here or for a hard copy please send a self addressed envelope with a 2nd class stamp on it to No Comment c/o BM Haven, London WC1N 3XX. Groups wanting bulk copies should email us.

About the hunger strikes in Greek prisons – April 2012 (pamphlet)

Letters from imprisoned and persecuted anarchists in Greece – new booklet
From editorial: “In the chaos of our own existence we are a part of the imponderable element which organizes subversion, plans mutinies, that leave even ourselves dazed. The translation of texts, letters, communiqués, etc. so that comrades in other countries around the world can read about the desires and ideas and projectuality of the comrades in Greece, is one more weapon at our disposal.”

Act For Freedom Now have also released responsibility claims Solidarity attacks in Greece and Solidarity with the anarchist fighters (and all those imprisoned for subversive actions or participation in social struggles in Greece).

Letters from anarchist prisoners of the Bombs Case in Chile
This document is a collection of letters from the Chilean anarchist “Bombs Case” prisoners, in an effort to share and spread their ideas beyond the prison walls. On August 14th, 2010, fourteen anarchists and anti-authoritarians were arrested in a series of raids in Santiago in what became known as the `Bombs Case`. They were accused of a series of bombings against capital and the state that took place around Santiago in the previous years, as well as of “criminal conspiracy” under the Pinochet-era Anti-Terrorist Laws. Click to download imposed version.

Freedom for Tukidjo and the rebels
The farmers and the people of Kulon Progo, Pandang Raya, West Papua, Bima and elsewhere in Indonesia, are appealing for international solidarity and complicity in their struggle alongside the anarchists and anti-capitalists, who are all against the violent terror of the Indonesian bosses, their paid murderers and corporate backers. Don’t let them fight alone! Download imposed PDF here.

The Marini Trial: Italian State Repression of Anarchist Revolt and Anarchist Responses – imposed
Those who rebel consciously against the ruling order, those who attack it without respite in however small a manner, are a real threat to the system of domination and exploitation. When these individuals are also those for whom anarchy and revolution are not just fine words, but reflect their decision to face life and struggle in a particular manner, the state recognizes that their revolt will be ongoing and needs to be suppressed. Therefore, it develops various strategies for repression, using the legal, police, judiciary and prison systems to keep those who rebel occupied with defending themselves. The Marini trial against anarchists in Italy, which has been going on for several years (the investigation beginning nearly ten years ago), provides a concrete example of this process.

4StruggleMag – Issue 19
Views, thoughts and analysis from the hearts and minds of North American political prisoners and friends. The file should be copied, double-sided, on legal paper (11 x 14 inches).

Our Lives of Burning Vision: About the Conspiracy Cells of Fire
Actforfreedomnow – Bourbouras present a 68 page publication about the most recent situations and events connected with the Revolutionary Organisation – Conspiracy of Cells of Fire and their 17 January International Solidarity Call for an International Revolutionary Front / Informal Anarchist Federation (Global). Check out the free PDF detailing their actions and texts : Our Lives of Burning Vision. Action solidarity and “Halandri” trial coverage here.

Revolutionary Struggle: Armed Struggle & Social Revolution
Pola Roupa, Nikos Maziotis, Kostas Gournas are imprisoned anarchist comrades in Greece who have taken responsibility, as well as of slain comrade Lambros Foundas, of membership of the Revolutionary Organisation – Revolutionary Struggle. Their actions and their articulate anarchist analysis of capitalism and their high hopes for social revolution press a question to each reader who is ready to rebel and embrace their freedom. On 24 October 2010 their trial began. You can download the zine here and find updates about the process translated into English here and here.

Solidarity with Anarchist Comrades Imprisoned in Greece
The passionate actions of the Greek anarchists and anti-authoritarians concerning the imprisoned comrades has in no way detracted from the immense solidarity they have always shown to rebels, selforganised workers, immigrants, local people and students in revolt, etc., in Greece and around the world. Not just that. Their actions extend far beyond ‘visible’ deeds such as the attacks and sabotage reported here, and include endless meetings, thousands of posters, leaflets, stickers, pickets, benefits, occupations of universities, radio studios, newspaper offices, etc. It would be fair to say that solidarity here in this country is also moving beyond benefits and counterinformation concerning imprisoned comrades and struggles throughout the world, to encompass action of different kinds. Click here to download imposed version.