Sgt Smellie, a riot cop in the Met’s Territorial Support Group (TSG – fully trained riot thugs), has been up in Westminster Magistrates Court all week so far on a charge relating to the anti-G20/police brutality protests on 1 and 2 April last year in central London around the financial district. Smellie is charged with ‘common assault by beating’, which relates to his violent assault on a woman on 2 April when protesters gathered in response to the death of Ian Tomlinson the day before. 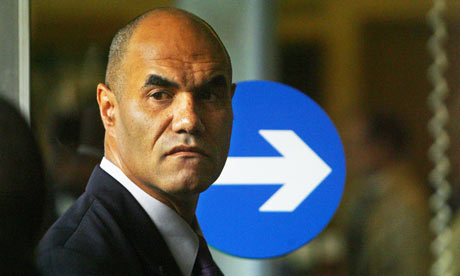 Smellie - Met riot thug who ended up on the telly

Smellie was caught on film by multiple cameras, in front of many witnesses, reacting violently to complaints by the woman, Nicola Fisher, after she was not allowed to join the protest when cops sealed it off. Despite all the evidence, it has taken a year for the case to come to trial. A result may be reached today.

Fisher, so far, has refused to come to court to testify. Apparently traumatised by the whole event, it is believed she feared the court may focus on her, instead of the charges levelled at the riot cop. It seems she may have been right, as defence comments and the media have focused on her alleged lifestyle and animal rights beliefs, instead of say the riot cop Smellie who is trained and paid to effectively attack unarmed and much smaller people. He of course is made out to be a loving father, and lauded by his superiors as a great cop. No doubt in their eyes he is, and if he hadn’t been caught on camera no doubt he wouldn’t be on trial – no other cop has been so far.

Outrageously, Smellie’s charges relate only to the two times he hit Fisher hard on her legs with his weapon, a baton (or asp), which left her with bruises 5 and 7 inches long. The backhanded swipe he gave her, which saw her hit in the face by his gloved hand, is deemed appropriate and lawful. See media reports and footage. And worth a read is the Metropolitan Police Authority’s Civil Liberties panel report into G20 policing, a 67 page PDF.

Meanwhile, back in the real world, a G20 protester from Bristol has been found not guilty after a 2 day jury trial in London this week. The Bristolian was charged with ‘going equipped to cause criminal damage’ after being arrested with a tin of spray paint in his bag early in the morning, but all the jurors agreed with his not guilty plea. Clearly the Met cops haven’t yet understood that Bristolian campaigners are ready at all times, indoors or out, to knock up a spray-painted banner. The innocent man may now sue the cops for wrongful arrest and wasting his time. In that case he will join the people arrested at the G20 convergence space (report & video), 2 of whom have shared a £6000 payout for wrongful arrest, with others set to join the payout soon – if you were arrested make sure you claim, and help fund future protests and actions.