The judge gave her verdict on Wednesday at Westminster magistrates court, in the non-jury trial of Sgt Smellie, the Met police TSG riot cop accused of assaulting a woman at last years G20 protests. Smellie had backhanded, and then hit twice on the leg with his metal baton, Nicola Fisher, the woman concerned. The question revolved around whether or not his baton strikes were excessive, as his backhander was deemed appropriate even by the prosecutor.

District Judge Daphne Wickham found no evidence had been provided to show use of the baton was not measured or correct. She said: “It was for the prosecution to prove this defendant was not acting in lawful self-defence. The prosecution has failed in this respect and the defendant has raised the issue of lawful self-defence and as such is entitled to be acquitted.” The judge said Sgt Smellie had a “mere seven seconds” to act when Ms Fisher ran in front of him hurling abuse at a vigil held on 2 April to mark the death of newspaper seller Ian Tomlinson at a previous demonstration. (from BBC report). 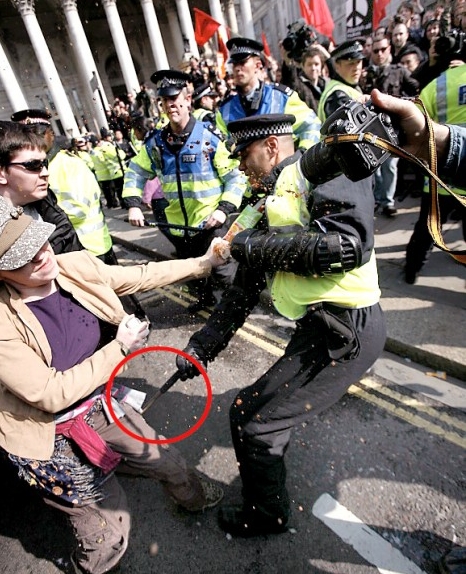 Smellie attacks as other cops look on

The judge, and indeed the media this last week, conjure an image of Smellie all alone surrounded by angry protesters. In fact Smellie had recently arrived on the scene as part of a large TSG detachment that came in to reinforce the ‘kettling’ of the protest against Tomlinson’s death, and the TSG were actively employed in forcing bystanders not in the kettle away from the protest. People could neither join nor leave the kettled protest, and were rightly annoyed. Video footage (from YouTube 1 and 2) not only shows the large number of cops close to Smellie, it also shows that by the time he goes to draw his metal baton there are 2 FIT cops right next to him. To suggest that the large Smellie was somehow threatened by the tiny Fisher and her carton of juice is just absurd. Intriguingly, in the videos you can clearly see the back of the head of a Legal Observer (balding head, wearing orange high viz) standing right behind Fisher. This experienced LO, a solicitor in fact, gave a statement to the IPCC investigation, but was not called as a witness by the prosecution, even though as a legal professional you’d think him to be a reliable witness. Smellie’s defence team of course called plenty of colleagues and supportive witnesses. Any protester caught on camera beating a cop, and claiming self-defence, would have been jailed months ago.

What conclusions can we draw from this latest injustice? We already know that the judiciary, the prosecution service, the media and the cops are all generally on the same team, or at least that the self-serving interests of individuals means they wont step out of line. Clearly video/photo evidence, however conclusive, will not on its own necessarily nail naughty cops. Complainants such as Fisher do need to show up as witnesses, failing to do so after going public and being paid for their story is a tactical error, although her reticence is understandable given the defence and media onslaught. Whilst widespread distro online of independant media footage led to an initial outcry over police tactics, in practice one year on virtually nothing has changed, despite many enquiries. Reliance on the legal process, or the liberal media, to deliver us justice, is clearly a blind alley.

So-called independent investigative bodies and commissions, such as the IPCC, are in practice part of the state and just serve to give it a veneer of legitimacy. Figures doing the rounds in the liberal media suggest that in the 4 years upto April 2009, there were over 5000 complaints against the 730 strong TSG, of which only 9 were substantiated by internal police complaints managers! A year on from the G20, when over 290 complaints were made to the IPCC, we have yet to see a single cop receive any sort of public censure. Smellie returns to duty today, he may face internal disciplinary proceedings, but we reckon it’ll be no more than a slap on the wrists and a piss-up with his superiors afterwards. The lack of any justice at all for the Tomlinson Family, one year on, is merely the norm. The state protects its own. We must protect ours.